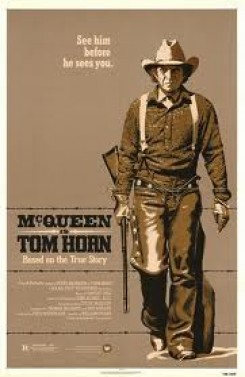 A renowned former army scout is hired by ranchers to hunt down rustlers but finds himself on trial for the murder of a boy when he carries out his job too well. Tom Horn finds that the simple skills he knows are of no help in dealing with the ambitions of ranchers and corrupt officials as progress marches over him and the old west.

AHA was denied access to the set of Tom Horn to supervise the animal action and as a result, horses were tripped during the making of the film. AHA rated the film Unacceptable and urged a boycott of the movie in a press release stating that "if enough people boycott [the film], the producers are going to get the message that they can't get away with animal cruelty."