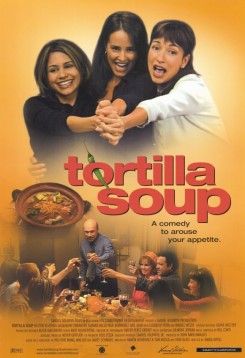 This is an English-language remake of the 1994 Chinese film, Eat Drink Man Woman, directed by Ang Lee. Tortilla Soup converts the story from one involving a Chinese family in Taipei to that of a Latin-American family living in Los Angeles. Hector Elizondo plays Martin, a retired Mexican-American chef and single father of three unmarried adult daughters. Martin has lost his taste for food, but continues cooking for his daughters who gather around the dinner table each evening to eat wonderful meals and discuss their lives. As his daughters' lives begin to change, he is served a new beginning for his own life.

In one of the many cooking scenes, Chef Martin retrieves a fresh fish with a net from a cooler where other fish swim. He sets the fish on the counter briefly and it is seen flapping around. Martin slams its head against the counter and begins to gut and slice the fish in preparation for cooking. The cooler was prepared ahead of time by an aquatic supply company that provided all seven live Bass for the film. Two real chefs practiced with the actor to teach him to scoop the fish up into the net from the cooler. The bass was set on the counter briefly and then given back to the wrangler who put it back into the holding tank unharmed. The fish that was hit against the counter, gutted and sliced up was purchased from a fish market that provides pre-killed food products.

Another brief scene finds the character Orlando chasing a chicken around the yard and then catching it. During pre-production, the actor was trained to be around chickens and handle them. To film the scene, a trainer put the chicken down on a mark and the actor ran towards it. As the chicken naturally ran from the actor, the actor continued to follow it. Eventually, the actor reached the chicken, picked it up in his arms and handed it to the trainer after the scene was filmed.