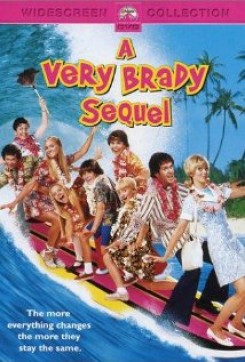 "A Very Brady Sequel" is another story based on the popular television series of the All American Family, "The Brady Bunch." It starts out like an Indiana Jones adventure where two explorers are seen discovering an ancient horse statue in Southeast Asia. The statue is brought back to the United States where it is auctioned off at twenty million dollars. There are only two of these rare statues in existence.

Now we are in the Brady's home and we see the other horse statue. Even in the nineties, Carol, Mike and the six kids are still living in the seventies. They still have the same house, wear the same clothing, that they have to get at a groovy thrift shop, and still believe that love makes the world go round. The Brady's have no idea that the statue in their home is valuable. In fact Carol is taking it to her woman's auction for charity.

Carol and Mike's anniversary is coming up and Mike is planning a surprise wedding to renew their vows. He's having problems planning the wedding, but those problems are nothing compared to what he faces when Roy, Carol's supposed dead husband, shows up.

Roy Martin was an explorer and he disappeared at sea on an expedition years ago. He was presumed dead and that's when Carol met Mike, fell in love, and became a Brady. When Carol sees Roy, he looks completely different to her. He tells her he had to have plastic surgery due to an accident he had. He also tells her all he could think about while being stranded was her and his girls. However oddly enough he doesn't quite remember all their names. Mike tells Roy he is welcome to stay in the Brady home until he gets settled. Roy agrees to stay, but after spending a day with the Brady kids, he wished he hadn't.

Roy asks Carol where the horse statue that he had sent her from an expedition was. He said it symbolized their love and he had to have it. She told him it was being auctioned at fifty dollars and he immediately went to bid on it. He gets to the auction hoping it will be a real quick deal. However Zza Zza Gabor wants the statue and she outbids him. When she turns to leave, Roy steals the statue and goes back to the Brady home.

Cindy, the youngest Brady child, has lost her favorite doll. Bobby, one of her brothers, pretends he is a detective and they search the garage for clues to find the missing doll. What Bobby finds is a picture of Roy, only it says on the picture that his name is Trevor and he was Roy's assistant. Bobby and Cindy inform the other Brady children of their discovery and they rush off to tell Carol. As the children are explaining that Trevor is not really Roy, he steps out of the room and pulls a gun on the Brady bunch.

Mike comes home and finds his family all tied up on the stairs. However, Carol is missing. Trevor has kidnapped her and taken her to Hawaii where a man named Dr. Whitehead is waiting to buy the rare horse statue. Trevor rents a jeep and starts to drive toward the rendezvous, however he gets a flat tire. When he stops, Carol escapes.

Carol is found by one of Dr. Whitehead's body guards who brings her to him. Dr. Whitehead doesn't consider Carol a threat, so he lets her go, but Carol, who loves to talk, insists on telling him her story and how she got there. When Trevor arrives, Dr. Whitehead tells him he is no longer interested in buying the horse from such a bad person. In fact his son Gilligan is missing because he was on "The Minnow", which was the boat that Trevor sabotaged.

Trevor is really angry. He pulls out his gun and tells Dr. Whitehead to give him the money. After following Carol's yarn, that she accidentally dropped, Mike and the rest of the Brady family show up in time to save Carol and Dr. Whitehead. Trevor says a curse word and that's the final straw for Mike, who punches Trevor and knocks him into the pool where the police find him and arrest him.

The animal action is very mild. When Trevor gets out of the jeep to inspect his tire, he finds a little toy tiki doll imbedded in it. He pulls the doll out of the tire and throws it into the air. It lands on top of a tarantula. The tarantula who was tethered to keep it walking in a straight line, went from point A to point B approximately eighteen inches. The trainer held the tether and used an air blower to move spider along. A very light foam plastic tiki doll, approximately two inches long, was suspended on monofilament line and was gently lowered from above. The camera was then speeded up to make it appear as though the doll fell on the tarantula.

After Trevor is out of their lives, Carol and Mike renew their wedding vows. They are in their backyard talking, when suddenly, Tiger, their dog, jumps up on one of the buffet tables. He trots across the table, then jumps across to the next one, trots to the end of that table, jumps off and exits. Trainer #1, positioned at the head of the first table, held the dog, then released him as the second trainer at the end of the table, buzzed and verbally commanded dog to come.