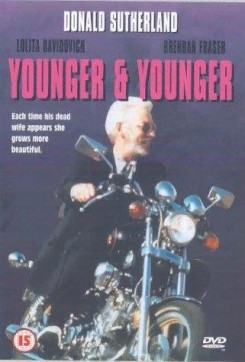 Younger & Younger is a romantic comedy which tells the tale of Penelope Younger, Penny for short, who dies of a broken heart due to her husband Johnathan's wild antics and womanizing.

Younger Storage Company has been in Penny's family for generations, and when she married Johnathan 25 years prior, it became his too. Penny continues to run the storage virtually by herself, because Johnathan is completely wrapped up in himself and in chasing women. Johnathan has a Whirlitzer organ, which he keeps in a room over the office at Younger Storage. One day Johnathan brings one of his women to his Whirlitzer organ room and makes love to the woman on top of the organ. Penny, in the office below, hears this and breaks down. Her heart gives out and she dies.

Johnathan, not too concerned with his wife's death, soon realizes just how important Penny was to the business, and to him, when he discovers he doesn't know the first thing about running the storage company. He starts to have visits from his dead wife who, with each visit, becomes "younger and younger" and more and more beautiful until she reaches the age she was when they were first married. He can think of no one or anything else as each day passes. He soon learns, for the first time, the true meaning of life and love.

One of the tenants at the storage facility raises rabbits, so there are many scenes in which rabbits are present. They are seen being held, petted, sitting on the office desk, and in various other scenes just being rabbits. In one scene a rabbit is in the office on the floor when Johnathan enters proclaiming that rabbits are not allowed in the office. He takes his foot and pushes the rabbit out the door, closing it behind him. For this scene, the actor took the side of his foot and lifted the rabbit slightly, moving him out the door, making it appear as if he was kicking the rabbit out. The rabbit was prepped for this scene and was not traumatized by this action.

In two other scenes rabbits are shown escaping from their caged van and hopping around the parking area of the storage yard. These scenes were shot in cuts. The rabbits were actually in fenced areas and their trainers retrieved them after the scenes were completed.

In another scene, dozens of rabbits are all sitting on a stairwell. The rabbits had been placed there by their handlers. A rabbit is also seen riding on the end of a rolled up carpet being dragged out of the storage house by a tenant. The rabbit was prepped for this scene and placed on the carpet, which was then pulled slowly down the corridor. Penny also has two pet goldfish which are present in a few scenes as atmosphere.