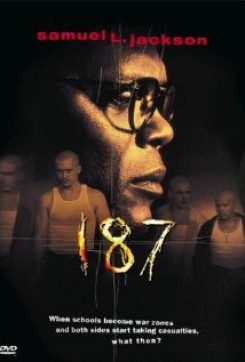 187 is a film about Trevor, a high school teacher in New York City who is threatened by a gang member. Trevor opens his text book one morning and finds the numbers "187" scribbled all over the pages. 187 is a penal code number for murder or "terminate on the spot". Later that day, Trevor is attacked by a gang member and stabbed ten times in the back. He survives the brutal attack. Fourteen months later, Trevor is substituting in Los Angels when he is taunted by three gang members in that city. This time he fights back and gives them a dose of their own treatment.

There is a dog seen in several scenes outside Trevor's house playing with the actor or on a lead chain. The trainer placed the dog on is mark and cued him with verbal and hand commands.

In one scene, Trevor finds the dog dead, supposedly choked by his collar when he tried to jump over the fence. For this scene a taxidermic golden retriever was used with fake prop blood.

There is a scene in Trevor's science class where a rat is seen in his cage. Trevor supposedly puts Demerol onto a sugar cube and gives it to the rat to eat. After eating the cube, the rat is seen lying on the floor of the cage apparently drugged to sleep. Ten minutes later he wakes up from the effects of the drugs and starts to move around. This scene was shot in cuts. A real and a fake rat were used. The real rat was used for the establishing shots and replaced by a fake animatronic rat for the segment of the rat drugged.

In a later scene, the rat is seen dead with a pair of scissors sticking out of his torso. For this scene, a fake rat was used made out of plastic and synthetic hair.

Other animal action consists of a coyote seen standing in a clearing and then running off into the night forest. The trainer placed coyote look alike on his mark and gave him a "stay" command.