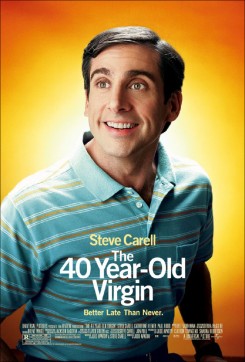 Andy Stitzer is 40 years old and has never been with a woman. Although he tries to hide this peculiar fact from his buddies, they find out and tell everyone at the electronic superstore where he works. Then, as good friends will, they make it their life's mission to help him lose his virginity as quickly as possible.

However, the film has earned a Monitored Unacceptable rating due to an unfortunate incident in a scene involving exotic fish that appear in an aquarium. According to a studio representative, the electricity had been shut off in the area housing the aquarium after filming ended. Left in a tank without proper aeration, all the fish died. The production never notified us of their intention to use fish, and therefore American Humane was not able to enforce our Guidelines for the safe handling of exotic fish. This lack of notification, coupled with the unintentional negligence that killed the fish, has lead to our decision to rate the film Monitored Unacceptable.

As Andy passes a park, he sees two dogs humping. The amorous canines used for this scene were a basset hound named Brewster and a silky terrier named Freddie. The dogs were well-acquainted and felt comfortable performing the action. A trainer put Brewster on his mark and then put Freddie behind Brewster with his front paws up on Brewster's backside. As the director called action, the trainer yelled "hump it." And Freddie did.

The goldfish at the bottom of a pair of boots in one scene are fake. The butterfly shown on television in the store is from stock footage purchased by the production.