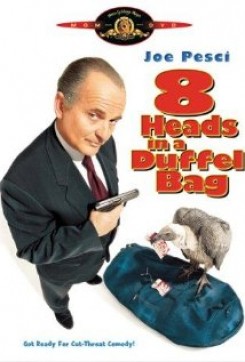 8 Heads In A Duffle Bag

8 Heads In A Duffel Bag is about an assassin, who loses the evidence of his latest "hit", a duffel bag filled with the heads of his last eight victims, and the obstacles he faces while retrieving them.

In one scene, the dog is seen playing tug of war with the duffel bag supposedly full of heads. The trainer showed the dog a favorite squeaky toy and then placed it inside the bag, telling him to "get it".

There is another scene, where the dog is seen with his head stuck under the bed, grabbing one of the heads by the hair. The dog's owner reaches down and picks him up, carrying him out of the room. The trainer placed the dog on his mark and cued him with verbal and hand commands.

Later, the dog is seen outside following Charlie, the man presently in possession of the bag, down some steps. When Charlie attempts to toss the bag into a dumpster, the dog starts jumping up to grab it. Trainer #1 placed the dog on his mark and gave the command to "go with". Then trainer #2 uses hand and verbal commands to cue the dog to "jump up" and run out of the shot.

There are several scenes where the dog is seen standing on a bed, walking from A to B throughout rooms, or sitting on a chair. The trainer placed the dog on his mark and used verbal and hand commands to cue him.

In another scene, a coyote is seen jumping down from the tail gate of a jeep and running off with a bag in his mouth, supposedly containing one of the heads. Then one of the men is seen shooting in the direction of the retreating coyote. The scene was shot in cuts. A dog-coyote mix breed was used for the scene. The trainer placed the dog on his mark and cued him with verbal and hand commands.

Later two men are seen sitting beside a makeshift barbecue with what is suppose to be the coyote, roasting on a spit. A fake coyote was used for this scene.

Other animal action consists of some goldfish seen in a bowl on a shelf and later, a man is seen picking up the bowl and placing it on the floor. There is also a fake head of a dog seen inside a kryo-freeze compartment at a University.