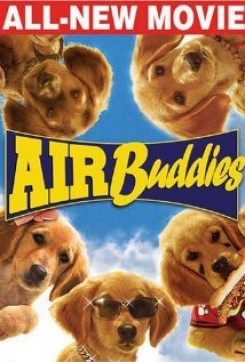 In this sixth movie of Disney's beloved franchise, Buddy and Molly's five puppies must save the day when their parents get dognapped by an eccentric villain determined to procure an authentic "Air Bud" dog for a very picky pint-sized client. Budderball, Bud-dha, Rosebud, B-Dawg and Mudbud must elude the scoundrels and avoid capture themselves if they have any hope of ever seeing their parents again.

Because Air Buddies was an international production, Walt Disney Pictures made arrangements for American Humane's Certified Animal Safety Representatives to supervise the animal action on location in Canada. American Humane applauds productions that commit to the humane treatment of the animals in their films even beyond our borders, and encourages other producers filming internationally to make the same commitment.

In a few scenes, Molly displays her ability to climb up and down to and from her home's second story window. The dog playing Molly for this action was trained in agility and handlers coached her from both the start and end marks. The sturdy trellis she crawled up was set at a 30-degree angle, had support slats for easier grip and had a four-foot plywood support against the house. Furniture blankets were disguised amid planters as precautionary cushions.

When Molly jumped from the eaves onto a car's roof and then hood, both landing points had non-slip mats glued on for traction. The vehicle was backed up to the garage door to eliminate any gaps, and the wiper blades were taped down so as not to create a trip hazard. The Safety Rep checked the roof shingles to be sure there were no splinters, slippery spots or nails, and the rain gutter was filled with black mats to prevent Molly's feet from getting caught as she went down.

Selkirk (Holmes Osborne) shows off a caged Siberian tiger he has acquired for the very spoiled Bartleby Livingston (Tyler Guerrero). Uninterested in the extravagant gift, Bartleby decides he wants an "Air Bud" instead. Later, Selkirk threatens henchmen Grim (Trevor Wright) and Denning (Paul Rae) that he'll feed them to the tiger if they don't locate the "baby Buds."

A Siberian tiger named Meeka was cued to pace, snarl and growl in these scenes. The trainer stood behind some nearby scenery and used a buzzer to direct the tiger. When Bartleby threw a ball at the cage, Meeka's trainer cued her with a buzzer and she turned and snarled. The production provided breaks of at least 30 minutes between the three short scenes in which Meeka appeared to allow the tiger plenty of time to rest. Safety precautions included having an emergency plan in the event Meeka escaped; having a safety talk with cast and crew before the tiger came on set; and avoiding all extraneous noise and running on set, which could agitate the tiger.

Molly and Buddy find their crying pups in a park, covered with a large net tent. Grim and Denning sit perched in a tree above them, and Denning tosses a net onto Buddy after he frees his puppies. When Denning jumps down, Molly bites his leg. The net was made of soft, lightweight cotton, and blunted pegs anchored the tent in the grass. Off-screen trainers used squeaky toys to get the puppies to push against the netting. A crew member on a ladder over Buddy dropped the net on the dog, and then a stuntman jumped down from the tree. A trainer stepped in for Denning, and Molly was trained to bite only his pants — not his leg.

When the bloodhound known as Sniffer leads Noah (Slade Pearce) and Henry (Christian Pikes) through a meadow to the dognapped puppies, the hound gets sprayed by a skunk. This scene involved two "plate" shots, which are shots taken at a particular location into which the filmmaker will later insert some kind of special effect. In this case, the dog and skunk were filmed separately in the meadow. The trainer placed the skunk on a mark and some treats nearby, and the skunk milled about to find the treats.

The hungry puppies discover a smorgasbord of treats at a drive-in theater's snack bar. Though it looked like mayhem, the action was actually well-choreographed and trainers hid under the counter ready to step in as needed. None of the prop nacho, hotdog or popcorn machines had electrical cords that the puppies could chew. Mudbud ate a dog treat instead of nacho chips; Bud-dha was allowed to eat the cooked but cold veggie dogs; and Budderball's popcorn was seeded with a trail of treats from the edge of the machine to the bucket inside.

A smaller puppy was used for the shot when a woman orders a tub of popcorn and finds Budderball inside. The actress was instructed to hold the tub with both hands and tip it slowly. Two trainers hid on either side of the counter, and the puppy was well-prepared for the tipping action.

For Rosebud's foray into the cotton candy machine, the tub was lined with pink polyester filler. Takes were filmed at different speeds to make it look like the machine was spinning fast. A trainer directly beside the tub manually moved it, and no take lasted longer than 30 seconds. A fan blowing from above simulated air in the candy machine, and Rosebud's wind-tousled fur enhanced the motion effect.

During the pigpen sequence, Denning and Grimm have a hard time distinguishing between puppies and piglets. A trainer caught and held one piglet until right before action when she turned it over to the actor.

He picked it up and pretended to fall on his face in the mud, gently releasing the piglet toward the camera. Mud and makeup were not applied near the puppies' mouths or eyes, and all dirty dogs were washed and dried when the scene ended.

Many safety precautions were in place when Billy the Goat led the puppies into the hayloft to avoid Grimm and Denning. The loft was actually only seven feet high, and the area underneath the animals contained stunt pads and lots of hay. For added safety, unseen trainers held each dog from behind, and the puppies and goat were well-prepared and comfortable working together.

A wolf in the forest sees the puppies and eventually helps lead them to where the villains are holding Molly and Buddy. For this sequence, trainers used a wolfdog, which is a cross between a wolf and a dog, and all the canines were prepped to work together before filming began. Three trainers worked with the puppies for the point A to point B runs, while two handlers worked with the wolfdog. All paths were cleared of obstacles and the field was checked for holes that could be trip hazards. The shot where Rosebud has a face-to-face confrontation with the wolf was a visual effects shot, using a split screen.

Wild at the Winery

When Budderball walks up some stairs to explore a vat of wine, he ends up falling in and must be rescued. Safety precautions included hidden trainers just offscreen, non-skid material applied to the steps and netting under the stairs so the puppy could not fall through. For the rescue, a wet-suited trainer in the water cued Budderball to jump in and assisted the puppy throughout the scene. The water was warm and safely colored to look like wine, and the grapes in the tank were plastic. The young actors were trained on how to grab the puppy out of the water, and an unseen crew member was positioned in a vat under the platform in case they accidentally dropped him.

In the big finale, the puppies and boys start the wine barrels rolling to knock out the bad guys, and some of the puppies appear inside the empty barrels. Filmed in multiple cuts, one of the rolling shots focused on the side and legs of a stuffed dog which looked remarkably like a real one. Trainers also had a "rolling" barrel controlled by a hand crank mechanism which they used for close-up shots with the real dog. The barrels on the floor were secured so they wouldn't roll if a dog or person knocked into them.

When wine comes gushing out of the building and engulfs Buddy, the puppies and the villains, this was actually a visual effect. No animals — or people — were subjected to a flood