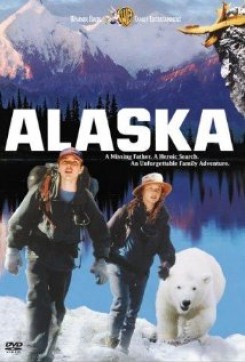 Alaska is a film about two courageous children, nine year old Jessie, and her thirteen year old brother, Sean, and their journey into the Alaskan mountain range, in search of their missing father.

Jake, their father, is a bush pilot and his plane has gone down near Devils Thumb during a storm. After rescue crews fail to locate him, the children, convinced that he is still alive, set out to find him themselves. Along their journey, they come across a poachers campsite and discover a captured polar bear cub. When they are about to leave Jessie hears a whimpering sound. Upon closer inspection the children find a polar bear cub in a barrel. Jessie and Sean manage to open the gate and set the cub free.

The children soon find that they have acquired a friend and protector in the cub. The cub follows them on their journey, saving them from drowning in the rapids and from the clutches of the poachers, that are never far behind. When they finally find their father, he is stranded on a ledge on the side of a mountain. Sean climbs down the mountain towards his father as Jessie holds onto the rope connected to his waist. As Jessie attempts to pull Sean and Jake up, a knot comes loose on the rope and it starts to slip. Jessie knows she can not save them, however, she finds that she is not alone, as the cub appears. The cub, with the rope in his mouth, helps pull Sean and Jake to safety. After everyone is safe and well again, the children take the cub back to the snow covered mountains and release him.

The cub is later seen inside a cage in the helicopter after two poachers have captured him. They take out a polar bear skin, which is supposed to be his mother, and put it up to his face through the cage. The cub whines and sticks his tongue through the cage at the head of his mother. The trainer placed the cub into the cage and loaded it in the cargo area of the helicopter. He then used verbal and hand commands with food as a reward to get the cub to look in the correct direction.

When Jessie and Sean come upon the poachers camp they discover many dead animal skins, among them a polar bear. As they start to leave they hear a commotion and go to investigate. The kids find a polar bear cub inside a barrel type of cage with a hole in the side where the cub can stick his head and paws out. The kids stand on top of the barrel and manage to lift up the gate to set the cub free. But, the cub decides that he does not want to leave until his new friends come down. So he stands up and puts his paws on the side of the barrel in an attempt to reach the kids. He then rocks the barrel and they fall off. The bear pursues them as they run towards their kayak in the water. The cub retreats when he hears the poachers approaching but starts his pursuit of the kids again after the poachers pass by. The scene was filmed in cuts. The trainer placed the cub inside the cage for the establishing shot. When the cub stands with his paws on the cage attempting to get to the children, trainer #1 held the lead chain while trainer #2 stood on the top of the cage with a food reward. The trainer used a lead chain, a buzzer, and food as a reward to cue the cub.

Later that night, the cub catches up to the two kids. The kids hear a commotion and look up to see the cub standing on a rock above them, growling. He comes down into their campsite and starts to eat their food until he hears someone approaching. The poachers come into view and the cub hides behind some bushes. The scene was filmed in cuts. When the cub comes down from the rocks into the campsite, the trainer used a buzzer to cue her to her mark. For the segment where she eats the food from the pan, trainer #1 used a verbal command "hold it" which prompts the cub to grab the pan. Trainer #2 held the pan as the cub ate the food. The pan was made out of rubber so the cub would not be harmed if she tried to bite or play with it. When the cub hides in the bushes, the trainer used verbal commands and the buzzer to cue her with food as a reward. The scene was shot on an interior set before a blue-screen and was inserted later during post production with the actors and background.

The next day, the kids pause for a minute while on their journey. They are soon hit with large snowballs and when they look up to see where the snow came from, Sean sees the cub. Sean is still looking upward as the cub pushes some more snow into his face. This was the cubs first look at snow. The cub usually pushes things that she likes, therefore pushing the snow over the edge was a natural reaction.

When the kids are nearing Devils Thumb, the poachers appear in their helicopter and chase the cub. They successfully shoot the cub with a dart and then load him into the helicopter. While in flight Perry, one of the poachers, realizes that the bear is waking up and before he knows it the bear starts attacking him. The cub starts to wrestle with Perry and he tells Koontz, the pilot, to land. After landing, the bear cub lunges out of the helicopter and lands on Perry. He then proceeds to attack the man and eventually bites him in the knee. The gun Perry was holding goes off, hitting Koontz. The bear cub is seen running off into the woods. The scene was shot in cuts. A real and a fake bear were used. A real bear was used for the scenes involving the fight with Perry. The trainer doubled for the actor in all of the physical contact scenes with the cub. When the poacher and cub fall out of the helicopter, the trainer holding most of the cubs weight, rolls onto a foam pad four feet thick. The trainer and cub wrestle together playfully. A fake bear was used when the cub is seen being shot with a tranquilizer and also used in the helicopter..

When Jessie is trying to pull Sean and Jake up the mountainside, the bear comes to their aid. With the other end of the rope in his mouth, the cub helps pull them to safety. The segment of the bear seen pulling on the rope was actually filmed on an interior constructed mountain set. Trainer #1 released the rope to the cub and the cub pulled the rope about eight feet towards trainer #2, who was using verbal commands to call the cub.

When everyone has recovered, Jake and the kids take the polar cub back to the snowy mountain top. After spotting a mother and her cubs, they decide to set the cub free at that location. The kids get the cub out of the helicopter and Jessie kneels down to say good-bye and the cub licks her face. As Sean says his good-byes, he feeds the cub a marshmallow pie and as thanks, gets his face licked too. The cub is last seen as he romps away in the snow with his new found friends. The cub was first given a food treat then he licked the actors faces.

The polar bear cub is seen throughout the film following the children through the woods, swimming in a stream, standing on a rock, eating marshmallow pies, sitting in camp, and hiding from the poachers. For all of these scenes, two trainers were present. One trainer released the cub, while the other trainer used verbal commands and a buzzer to cue her to her next mark. In one scene, the cub is seen swimming behind the kids kayak. The assistant trainer released the cub while the trainer sat in a boat with the camera crew calling to the cub. There are several scenes where the girl or boy is seen stroking the bear or feeding him. All of these scenes were accomplished with the trainer using verbal commands with food as a reward. To protect the bear from wandering off, a hot wire fence was used around the area when she was being filmed.

Other animal action consists of a scene where Jessie is seen running down the dock and almost collides into a fisherman. The commotion makes him drop the fish out of his wheel barrel onto the dock. Another scene is when Sean goes to the trading post to check on the mail and a hawk is seen sitting on his perch. The hawk squawks and flaps his wings. There were no live fish used for the scene where the fish are dropped onto the dock. The eagle was provided by the Wildlife Rehabilitation Center in the area.