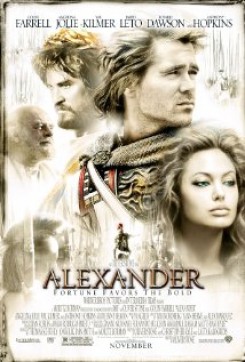 Alexander, the King of Macedonia and one of the greatest military leaders in the history of warfare, conquers much of the known world.

American Humane's Film & Television Unit did not monitor the international production Alexander, which was filmed in England, Morocco, and Thailand. The work of American Humane's Film & TV Unit is funded by a grant from the Industry Advancement and Cooperative Fund – administered by trustees from the Screen Actors Guild (SAG) and the Alliance of Motion Picture and Television Producers (AMPTP) – which allocates resources solely to cover SAG domestic projects working under the SAG/Producers codified agreement.

Productions filming abroad do have the option of contracting for American Humane's monitoring services. However, this provision does not guarantee that the film will receive American Humane's End Credit Disclaimer, since the Disclaimer is awarded exclusively on the basis of the animal treatment during production. The filmmakers of Alexander did not request American Humane's services, and since American Humane was not present to witness the extensive animal action firsthand, we have rated the film "Not Monitored."

In November 2004, Intermedia, the producing company, notified American Humane that documents regarding the treatment of the animals would be submitted for review and that the producers used their own language at the end of the film to assure the public that animals were not harmed.

Their language is an unofficial end credit that is not endorsed by American Humane. American Humane has consulted its legal counsel regarding this unacceptable and inaccurate verbiage and is notifying the producing company to cease and desist the use of the film's misleading end credit.

The drastic increase in runaway productions makes American Humane's job as the industry watchdog of humane animal treatment on the set all the more daunting. Unfortunately, the accepted standards of care vary greatly outside of the United States, and American Humane faces a constant struggle with U.S. filmmakers unwilling to make our on-set monitoring and stringent Guidelines for the Safe Use of Animals in Filmed Media a top priority on their productions.

You can help make sure the American Humane Association is there to monitor animal action in future films both in the United States and abroad by:

3) Letting your voice be heard. At the movies, stay through the end credits to be sure the film received the official and accurate "No Animals Were Harmed" Disclaimer. If you do not see it, e-mail your concerns to American Humane at info@americanhumane.org.