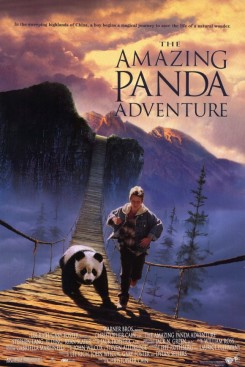 The baby panda was seen throughout the film in mainly mild action. However, there are also some scenes where stunts were performed. Toward the beginning of the film, the mother bear is trapped in a steel-clawed trap. She is rescued and transported to the compound in a helicopter. These scenes with the mother bear were accomplished with an animatronic bear. In the next scene, as Ryan and Ling, with the baby bear walk back across the wobbly rope bridge, the poachers shoot at Ling who drops the baby. To accomplish this scene, stuffed pandas affectionately known as "stuffies" were used. Ryan then picks up the baby and continues on across the bridge. However, before they can get across the bridge, it collapses and the three fall down into the raging rapids below. The baby clings to Ryan who never lets go of it. In another scene, they fall back into the rapids, also floating down a waterfall. For these two scenes the stuffies were used. In another scene, the poachers appear to spook the horse that is pulling the cart with the three of them in garbage bags. To accomplish this scene, the wrangler merely said "giddyup" and the horse took off running. For the scene where the three of them fall off the cart still in the garbage bags, a stuffie and two dummies were used. Prior to the three arriving at the Four Sisters Mountain Reserve, Ling is carrying the baby bear, who can barely hold his head up. The animatronic was used for this scene which shows the baby's head resting on Ling's shoulder. As they climb to the Four Sisters Mountain Reserve, Ryan, who once again has the baby in the back pack, stumbles and then falls down into a tree below in which some birds are inhabiting. In this scene, an animatronic bear cub was used. The birds, acquired by the Chinese government, were simply released into the wild to fly free. The sound of the baby panda whining and crying was dubbed in during the post production. Additional animal action included a snake coiling next to the rock where Ryan was sitting. For this scene a snake handler merely positioned the snake by the rock. A bull is also seen chasing Ryan across the wobbly rope bridge. This scene was filmed in cuts. In actuality, the bull never got near the bridge. It was filmed separately and went to the edge of the bridge only. The flock of sheep that walked across the road and back, were provided by local shepherds. The leeches that clinged to Ryan and Ling were rubber.