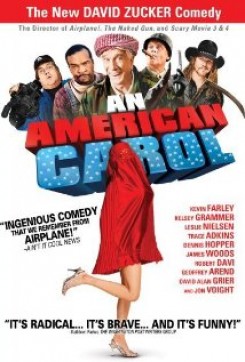 In this political take on Dickens' A Christmas Carol, a liberal, unpatriotic filmmaker decides he wants to eliminate the Independence Day holiday. Three spirits visit him and show him the error of his ways.

In an Afghan village, chickens, goats and dogs walk around in the background. Cast and crew members were introduced to the animals and were instructed on their proper handling before filming began. After securely tying a couple of goats to posts and handing leashed goats to the actors, trainers stood just off-camera. The walking action was very mild, and several goats were alternated in different takes to prevent them from getting too tired. Trainers placed the chickens on their marks on the ground, where feed had been scattered to entice them to stay. They were retrieved using puppy pens and nets between takes. During a couple of takes, a well-trained dog was cued to walk from one point to another, where dog treats had been hidden. The dog was not fazed by the other animals.

Afghan people roast chickens on a burning car. The burning car was a special effects fire controlled by effects crew and the cooked chickens were food product, which the production provided documentation for. Two live chickens were also used in this scene, but only in the background. The chickens were placed on their marks with feed scattered around. They were kept a safe distance from the controlled fire, and trainers stood nearby as a precaution.

Animals were never near moving vehicles or explosions, and anytime they were near a controlled fire, they were kept a safe distance and kept clear of smoke.

Production provided documentation that the pigs hanging in the background in Afghanistan scenes were plastic props.

Due to late notification or limited resources, American Humane did not monitor any of the mice or bird action.