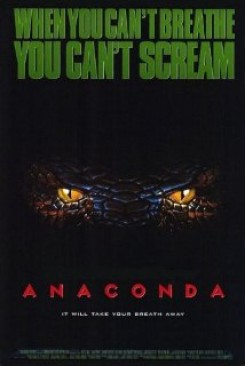 Anaconda is a film about a documentary crew's search for a tribe of Indians in the Brazilian jungle, who are believed to be extinct. Unfortunately for the crew, instead of finding the Indians they encounter a man eating Anaconda. It becomes a battle of survival between the giant snake and the crew.

In the beginning of the film a barge, in the middle of the river, is seen with monkeys and parrots in cages. The barge begins to shake and the animals become excited as they sense a predator approaching.

There is a scene where they blow up a bridge and small snakes are seen lying all over the boat. The snakes were provided by a local animal handler in Brazil.

One night a couple of crew members decide to go ashore and explore. While there, they hear some rustling in the bushes and thinking it is the snake, they start running back to the boat. One of the guides appears out of nowhere and shoots whatever is behind them. Next, you see the trio walking back to the boat dragging what looks to be a dead boar.

Later a black panther is seen in the jungle as the Anaconda approaches. The sounds of thrashing is heard and you can faintly see the panther being attacked and eaten by the Anaconda.

In the scene where the small snakes are hanging all over the boat, one of the crew is bitten and the snake begins to suck on his finger. One of the guides grabs the back of the snake's head, pulling it off and tossing it into the river.

There is a scene near the end of the film where a large number of small snakes are seen in a boiler room on an abandoned barge.

One of the guides is seen using a crude method of pole fishing to catch fish. Later, the same man is seen cutting up the fish for dinner.

In another scene, one of the crew members is under the water when something floats into his mouth. When he is brought on deck, a large wasp is extracted from his throat.

The live animal action was filmed in Brazil and all of the animals were provided by a local animal handler.