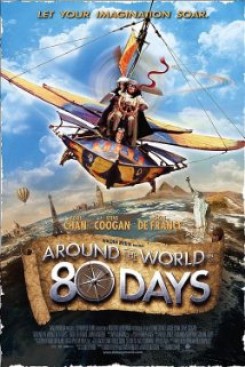 Around The World In 80 Days

This version of the classic novel set in 1872 focuses on Passepartout (Jackie Chan), a Chinese thief who steals a valuable jade Buddha and then seeks refuge with an eccentric London inventor and adventurer, Phileas Fogg (Coogan). Phileas bets fellow members of his gentlemen's club that he can make it around the world in a mere 80 days using a variety of transportation methods, including boats, trains, balloons, elephants, etc. Passepartout uses his amazing martial arts abilities to defend Phileas from the many dangers they face along the way.

The American Humane Association monitored only the re-shoots of some horse action in this production; therefore, we have rated the film Unknown.

In one scene Phileas encounters the Wright brothers, who have lost a wheel on their wagon and are stuck on the side of the road. Trainers positioned the harnessed horses on mark near the wagon, and each horse wore a rope lead held by a trainer off screen. A second trainer hid behind a nearby bush while the horses stood and nibbled on some grass. There were six wranglers on set, as well as a pick up rider in case any of the horses decided to wander. Groundskeepers cleared the area of debris and all non-essential crew were removed from the set.

Also during this sequence, a rattlesnake strikes and Phileas picks up the reptile and tosses it out of the way. American Humane did not monitor the snake and has received no information from production concerning the additional animal action in the film.