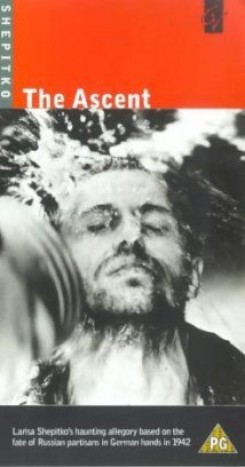 The Ascent is based on the true story of an Italian prisoner of war captured in Kenya by the British in 1942 during the African campaign of World War II. The prison camp is located at the base of Mount Kenya and this beautiful and challenging peak becomes the focal point of the film. The head of the camp, Major David Farrell, has attempted to reach the peak of Mt. Kenya on many occasions and never has succeeded. His continuous failure becomes a joke amongst the prisoners. One prisoner in particular, Franco D'Astassi, who continually tries to escape, becomes the Major's nemesis and ends up succeeding where the Major fails, both on the mountain and with a woman. During one escape attempt, Franco steals a jeep. He drives through the African countryside and a small village where zebra, goats and cows are seen in the background. Eventually, he crashes the jeep to avoid hitting another truck stuck in the road. The owner of the truck and his beautiful daughter, Patricia, at first, hold Franco at gunpoint. Once they realize that he means them no harm and can fix their truck, they let him do so in return for lunch. Franco peacefully goes back to camp when the British soldiers catch up with him. However, his charm and intellegence are not lost on Patricia who, prior to this, was being courted by Major Farrell. Franco sees Mt. Kenya as an obstacle between him and freedom, but having climbed many mountains in the past, he knows in his heart that he can climb the mountain to freedom if given the chance. When he goes before Major Farrell for his reprimand after the escape attempt, Franco taunts the officer for failing to conquer the mountain. This only infuriates Farrell even more. Although it is Franco who is put into solitary confinement, it is Franco's words which haunt the Major and make the captor a prisoner of his own conscience. Several of the other Italian prisoners devise a plan to truly humiliate the British and rekindle hope and pride amongst the Italians who have felt disheartened by Franco's failed attempts at escape. They believe that if a select few succeed in climbing Mt. Kenya, plant the Italian flag on its peak and then return to camp, it will be a triumphant and brazen act of honor. Franco is elected to be one of the climbers and the preparations are made. Prisoners who are artisans make the climbing implements and other gear necessary for the attempt. One of the German prisoners discovers the plan and threatens to reveal it to the British unless he is allowed to go along. He eventually does betray them and Major Farrell is able to track Franco onto the mountain. The Major particularly hates Franco since he has touched the heart of Patricia, whom he had intended to marry. Franco resembles Patricia's husband who was killed in the war and she has a passionate moment with him. Patricia had never loved Farrell and refuses to marry him. Franco succeeds in reaching the peak and plants the Italian flag before surrendering to the doubly defeated Farrell.

The Ascent was shot on location in Kenya and the animal action was the result of filming the animals in their natural habitat. The jeep that drives by the herd of zebra is never very close to the animals. The herd consisted of just a few animals spread out in the background and foreground. In the village scene, the goats and cows were contained in corrals next to the road. Later in the film, two rhinos are seen in the far background walking on the plain outside the camp area.