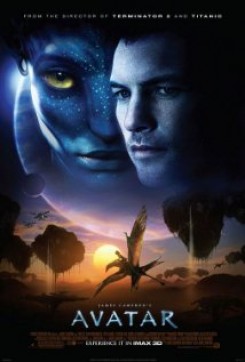 Jake (Sam Worthington) is a war veteran sent to the planet Pandora to get to know the inhabitants. He helps protect the planet, which is soon to be under attack.

This film was created using motion capture technology, in which performers wear miniature computerized motion sensors near joints and facial areas to capture the movements and facial muscle nuances that occur with each gesture, motion or expression. The live action was performed in a motion capture studio covered in dark fabric and carpet (called a "void") and then recorded as computer animation data, which was then mapped onto a computerized 3-D model. In this technology, humans wear a bodysuit for the "capture," but animals need to be "captured" differently because of their body shapes, fur and other characteristics. To prepare the animals for having their motion data recorded, trainers shaved small areas of fur or hair where the movements would be recorded, such as near joints and on the face. Velcro pads were attached to the shaved spots with a nontoxic, nonirritating silicone adhesive. White light-reflective balls were placed onto the Velcro to capture the motion data onto the computer. The exception to this was horses' tails, which were not shaved, but wrapped in a sensor-laden material. The adhesive and any additional markings were washed off each evening after filming ended.

Throughout the film, horses are seen outdoors standing or being ridden at a walk, canter or gallop. We also see people mounting, dismounting and falling off horses. These scenes were all filmed inside the capture studio. Horses were given ample room to start and stop running. Stunt riders fell off the horses and onto stunt pads on the ground. Computer animation and post-production movie magic created the atmosphere in each scene, be it fire, explosions, water, branches, bean stalks or bridges. For scenes in which horses appear to be near fire, trainers cued them to "dance" or act skittish or afraid -- the horses were not actually agitated nor were they ever near fire. Well-rehearsed actors, costumed trainers and stunt riders guided the horses to run in certain ways and at various speeds. Custom-built ramps were secured to the ground for scenes involving upward or downward movement, such as the horses running up steep hills or bridges. Post-production effects made the traveling of horses at an incline appear longer and more intense than it was. Carpet was secured to floors and ramps to give the horses safe and comfortable footing. For scenes in which a horse is seen rearing, a trainer or stunt rider cued the horse to perform this action. All weapons used near horses were plastic props wrapped in foam.

In the scene in which the horse clan attacks the sky people, it appears as if there are hundreds of horses and riders, as well as several big planes and helicopters in the air. As the battle ensues, riders fall off horses, horses flip over and fall down, and a horse catches fire. This whole battle was created by computer.

All other animals and creatures in the film were computer-generated images.

American Humane also monitored a scene with tiger cubs, which was cut from the theatrical release.