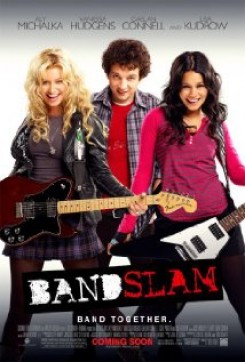 Will Burton (Gaelan Connell) has always been a misfit, but when he moves to New Jersey with his mom (Lisa Kudrow) and starts at a new high school, he finds friends and music to get him through tough times.

Will's (Gaelan Connell) mom, Karen (Lisa Kudrow), fosters dogs, and in a couple of scenes, dogs are seen in the house. As Karen and Will sit at the coffee table eating dinner, Mazzy the dog (a Jack Russell terrier) is begging nearby. Karen tells the dog to go get some Maalox, and the dog exits and comes back with an Ex-lax box in his mouth. Karen then asks the dog a second time to go get the Maalox, and the dog exits once again and returns with a bottle of Tylenol in his mouth. Both times Karen takes the item out of the dog's mouth and gives him a treat from her plate. For this scene, a trainer placed the dog on his mark and stood off-camera. The trainer called to the dog, who walked just off-camera to the trainer, and gave the dog the box and bottle props. The box was empty, and the bottle had a few seeds in it to make it sound as if there were really pills inside. The bottle was tightly sealed so the dog could not access the seeds. The well-rehearsed actress then called to the dog and took the box and bottle in exchange for a treat. The set was closed to only necessary cast and crew, who were instructed on the handling of the dog before filming began.

Later when Will calls Karen to tell her some good news, she stands in a room in her house surrounded by three howling dogs, and one of them jumps up and down with excitement. Each dog was accompanied by a trainer, who placed the dogs on their marks and stood just off-camera using hand signals to get the dogs to howl and jump up and down. The dogs were introduced to each other before filming and were well-rehearsed for the action.

American Humane also monitored a scene with Mazzy carrying a roll of toilet paper to the bathroom, which did not appear in the theatrical release but might appear on the DVD.