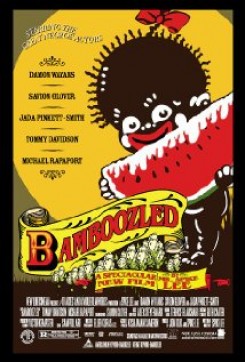 Bamboozled is a sharp satire on the television industry starring Damon Wayans as a writer, his demanding boss, Michael Rappaport, and the two men (Savion Glover and Tommy Davidson) who are recruited for a musical series Wayans has written. The show, a spoof on early vaudeville acts and racially demeaning movies, unexpectedly becomes wildly popular with the public, radically affecting the lives of the men involved.

There is minimal animal action in the film - only one scene featuring Glover and Davidson inside a chicken coop doing a vaudeville routine with chickens and roosters in the background. The coop was on the set and the sequence was shot under climate-controlled conditions.

American Humane Association monitored the animal action and has given this film an Acceptable rating.