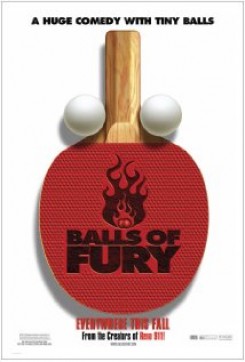 A former childhood pingpong champion, Randy Daytona (Dan Fogler) is all grown up and trying to put his past behind him when he is recruited by an FBI Agent (George Lopez). His mission is to bring down the notorious Feng (Christopher Walken), a dangerous mob boss and avid pingpong fan.

An old man removes a cricket from a small wooden cage and Randy Daytona (Dan Fogler) snatches it from him and smashes the insect. This scene was filmed in separate shots. The actors were instructed on the handling of the insect before filming began. A few crickets were placed in the small wooden cage right before filming began. A wrangler then placed one cricket in the actor's hand just before the camera rolled and removed it at the end of each take. Randy pretended to snatch the live cricket from the old man's empty hand. A prop cricket, used to simulate the dead cricket, was then placed in the actor's hand and revealed. Later, the old man shakes a small wooden box which appears to have a cricket in it. Randy opens the box, picks up the dead cricket, and drops it back into the box. A prop cricket was placed in the box and used for this part of the scene.

A girl herds some chickens down a village road as a tour bus enters town. The wrangler doubled as the actress to move the chickens along. The road was prepared with water, leaves and dirt so the chickens had proper footing and could keep cool. The bus remained a safe distance from the chickens at all times. A puppy pen was used to contain the chickens between shots, and a few trainers with nets stood just off camera.

Production provided documentation that the animal carcasses, dead crickets, and a panda were props created for the movie. Bees seen in the film were computer-generated.

American Humane did not monitor scenes that include a tarantula and a cockatoo.