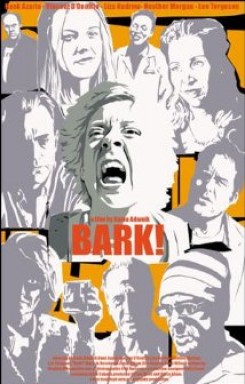 Sam is receiving complaints from his neighbors and landlord about the barking that is coming from inside his apartment. He tells them that he has taken in a new dog. Sam can't tell them the truth just yet. How much are people like dogs? After all, there are no laws that say you have to be sane.

Sam and Lucy's pet pooch, Gibson, was played by an Australian Shepherd whose real name is Gibson. The dog was introduced to the actors in pre-production so everyone felt comfortable together. So comfortable in fact, that the actress who played Lucy was able to play tug of war using a sock with Gibson. Two trainers and a veterinarian accompanied the dog to the set each day. The trainers would put the dog on its mark and use a combination of verbal cues and hand signals to get the dog to achieve the action needed.

Lucy and Sam appeared in several scenes walking dogs on leashes. There were also a couple of scenes that take place in the park with dogs on leashes or chasing a ball. All of the dogs were provided by the trainers and were introduced to each other and the actors before filming began. The dogs that appeared in scenes together lived together so they were socialized and familiar companions. The extras included: an American Bulldog named Elvis, a Corgi named Dakota, a Maltese mix named George, a Chow mix named Betty, a Pug named Sneech, a Daschund named Sheridan and a Pitbull mix named Madison. The trainers placed the dogs on their marks and stood just off camera as the scenes were filmed. It was a day in the park for these pooches!

Peanut butter was spread on the actor's arm in the scene where Gibson licks Sam's arm as he sleeps in the chair. A beetle was made out of rawhide and filled with peanut butter for a scene in which the bug gets squashed and then eaten by Gibson. A live beetle was purchased for this one scene in the park where it is shown crawling across the newspaper before the fatal smack. The live beetle was returned afterwards and the fake beetle, made of edible products, was used to complete the action.

There are some customers with pets in the background when Sam brings Gibson to the vet. There is a parrot on a perch and a rabbit being carried in someone's arms. These shots were filmed separately under the supervision of two trainers and edited together in post production.