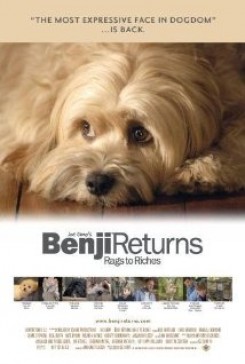 Benji: Off The Leash

A new generation of Benji fans will delight in this uplifting tail — err, tale — of an unwanted mutt on a mission to free his mom from a backyard puppy mill while easily outwitting a pair of bungling dog catchers hot on his trail. This time around, Benji is befriended by Shaggy, a goofy canine sidekick who's a magnet for trouble. And like the original Benji, these dogs can relate to the abandoned characters they portray; series creator Joe Camp found the two lead dogs after conducting a nationwide search in countless animal shelters, and both dogs are now personal pets of the Camp family.

In an opening scene, five puppies nurse at their mother, Daisy. When Hatchett (Kendrick) discovers that the fair haired pup hasn't been "removed," he snatches it up and throws it across the floor. To simulate nursing, trainers enticed the pups with baby food applied to Daisy's belly and to a piece of black tape on the floor. Hatchett actually tossed a stuffed toy across the room.

A toy poodle named Be-Be plays the part of baby Benji. Because of the dog's young age, the production took significant safety and handling precautions. Whenever a scene called for Colby (Whitaker) to hold the pup, a trainer handed it to him and took it back between takes. For added protection, two dog trainers and a vet were on set at all times. All the puppy "actors" received their initial vaccinations prior to filming; dog handlers could only touch or pet the puppies after first sanitizing their hands; and puppies worked a maximum of 30 minutes at a time.

"Shaggy" makes his appearance when a man pulls over on a dirt road, shoves the dog from the car, and drives away. For this scene, the trainer placed Shaggy in the front seat next to the stunt driver, who reached over and gently pushed the dog from the car. Director Joe Camp lay on the ground next to the camera and called Shaggy to him. As soon as Shaggy was safely secured, a grip closed the door and the car drove off.

In another scene, Shaggy watches some grazing cows when an animal control van drives by and almost hits him. For this action, the van passed by after Shaggy safely crossed the road and met his trainer, and the nine Holstein cows were tethered to the ground or tied to fence posts with rope halters. The dog never came in close contact with them.

The action continues when Shaggy escapes to the cow pasture with dog catchers Sheldon and Livingston in hot pursuit. One cow turns to look at Sheldon and proceeds to kick him in the rear end. To make the cow look at Sheldon, a wrangler physically turned the cow's head, and a fake cow leg was used to kick the actor. For this scene, the camera shot low and level with the cows' legs. Three trainers formed a triangle and took turns calling Shaggy to them so it looked like the dog ran between the Holsteins. Shaggy's run was actually far enough away from the cows that there was no chance of contact.

Sheldon and Livingston pursue the dogs and fire a tranquilizer dart at Shaggy. To execute this scene, a prop man fired the dart into a tree as soon as Shaggy cleared the mark. The prop technician was instructed not to fire until the dog had cleared the tree, and to abort if he slowed down or stopped for any reason.

The chase continues and Benji pushes Shaggy over the edge of a ravine to escape. Both dogs fly through the air and land in the water below. Production used two stuffies for the canines' freefall, and Camp stood in a condor basket hovering about two feet over the stream to drop Benji and Shaggy into the water. The dogs then swam to the bank and walked out. A stunt coordinator was positioned to assist the dogs if they had any trouble in the water.

Toward the end of the film, Benji stands in the middle of a residential street and the animal control van screeches to a halt directly in front of him. Though it may appear the van comes harrowingly close to hitting Benji, the vehicle was actually stationary the entire time. Crew members jumped off the back of the van to make it look as if it had just stopped, and a trainer placed Benji on mark and cued him to look, bark, shake his head, and sneeze.

In one scene, Livingston and Sheldon throw a net over Benji as he leaves Finch's home. This action was done in two shots. First, the director tossed a lightweight net over Benji, who had been placed in a stand-stay position by his trainer. For the second shot, Benji has the net over him and the two actors take the net off, leaving Sheldon to scoop up Benji and walk away.

During the scenes at Colby's fort, a handler placed Merlin on his perch and rewarded him with frequent treats and water for his actions. Crew members standing outside the fort moved cans and ropes to elicit looks from the bird, and two off-camera trainers made funny sounds and movements to make the cockatoo bob around and squawk. Trainers gave Merlin fruit or nuts to chew on for shots when the script required the bird to speak.

As an added precaution during shots of Merlin in flight, furniture pads were placed on boxes to provide a large soft landing area. When Benji and Merlin appear together in the window sill, an unseen trainer held Benji to ensure that the bird and dog didn't get too close for comfort.