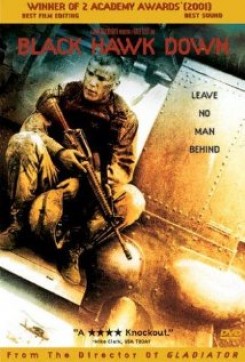 A graphic and gripping depiction of the Battle of Mogadishu, in which an elite force of 120 American soldiers were dropped into Mogadishu, Africa on October 3rd, 1993, to abduct two of Somalian warlord Aidid's lieutenants. Instead, two US Black Hawk helicopters were shot down, turning an expected hour-long operation into a bloody and chaotic 15 hour ordeal, resulting in the death of 18 Americans and hundreds of Somalians.

Although American Humane was not on set in Morocco to monitor the animal action, we did contact production to determine how the action was achieved. Per production, the stray animals that appear in the film either wandering amidst the men in the streets or seemingly caught up in the chaos, were owned by local Moroccan residents, who remained present on set to watch their animals during filming. All of the gunfire on the set was simulated with blank rounds and explosives were carefully controlled under strict safety guidelines for both the animal and human actors. The seemingly close proximity of the animals and humans to the explosives was simulated with a camera technique that created the illusion of danger.

From a helicopter's point of view, wild boar are seen running across marshes in one scene and are implicitly hunted and killed, culminating with a boar roasting on a spit in the next scene. The footage of the wild boar was stock while the boar on the spit was purchased already dead from a local Moroccan butcher.

In light of this animal action information from production, AHA is rating Black Hawk Down Believed Acceptable.