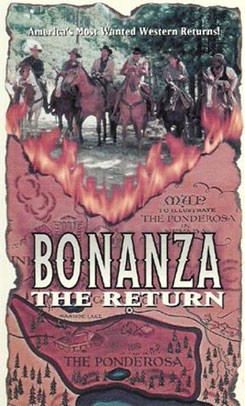 Bonanza: The Return is a nostalgic return to the Ponderosa Ranch, circa 1905, introducing Ben Cartwright's grandchildren. They are Adam's son, Adam Jr.; Hoss's illegitimate son, Josh; and Little Joe's son and daughter by two different mothers, Benj and Sarah. Benj, Sarah and Josh have come from various parts of the country and Adam Jr., from Australia to take possession of their inheritance. Once there, they entertain an offer from Augustus Brandenburg, a powerful and unscrupulous entrepreneur, who is obsessed with acquiring the Ponderosa. The Cartwright heirs are divided over this issue with young attorney, Benj, wanting to draw up the papers to sell. Ponderosa manager, Bronc, and ranch forman, Jacob, finally convince them that Ben would not have wanted them to sell. Brandenburg resorts to violent intimidation to get his way. However, the Cartwright clan, together with Bronc, Jacob and the ranch hand, Buckshot, stand tough and put up an effective resistance. Then, by bestowing lavish campaign contributions to the right politicians, Brandenburg secures the legal right to the Ponderosa. Through astute legal practice and the testimony of Brandenburg's disillusioned girlfriend, Loredo Stimmons, Benj handles the case successfully and wins in court, exposing Brandenburg's corrupt scheme. Brandenburg abducts Sarah in the woods. He forcibly takes her on a trip in his private train car. It is revealed that twenty years ago he was Gus Branden, a ranch hand on the Ponderosa. Desperately in love with Sarah's mother, he got into a fight with Little Joe over her and went for his gun. Ben Cartwright then shot Brandon in the leg in order to save Little Joe's life. Branden tried to sue in court, but the judge ruled that Ben had shot in self defense. Branden then went to Arizona where he struck it rich mining for silver, after which he devoted himself to seeking revenge against the Cartwrights.

The Cartwright Clan goes after the train on horseback, exchanging gunfire with Brandenburg's men. Benj jumps onto the train and rescues his sister, Sarah, but not before Brandenburg sacrifices his life to save Sarah in a dangerous moment on the train. To accomplish this, Benj rode alongside the moving train, enabling him to jump onto it. Care was taken to see that the horses ran alongside the train track but never directly on the track. Also, a hazier horse was used to control the other horses' speed. Back up horses were used for various takes of this scene so as not to overwork any of the horses. In one scene as the Cartwrights and the ranch hands are going down the trail on their horse drawn wagon, an explosion goes off in front of them. Suddenly, another blast is detonated behind them. The perpetrators, Brandenburg's men, then open fire on them from the bushes. The Cartwrights return fire as their horse and wagon race down the road. Soon the gunmen chase them on horseback as the gunfire continues. The wagon riders manage to pick off several of the horsemen, allowing them to put some good distance between them, but they loose control of the wagon when it hits a big rock, breaks away from the team of horses and bounces over a cliff. This scene was shot in cuts with fuller's earth and cork being used for the explosions. The horses were at least thirty feet away from the explosions. When the wagon went over the cliff, a break away wagon was used. At no time were the horses in any danger of going over the cliff with the wagon. In this scene, as in all scenes involving gunfire, quarter loads were used and the horses wore cotton in their ears for protection. There is a scene where a horse is bucking and falls in the snow. The horse was not wearing a bucking "flank" strap. He was just playing on his own in newly fallen snow. Although he fell, he was not tripped and was not hurt. Also, he had been conditioned for cold weather and was blanketed when he was not being used. There is a scene of a flashback of Hoss and Little Joe Cartwright with many cages of rabbits in the background. The two of them almost fight because Little Joe wants to skin them and sell their hides and Hoss won't let him. This footage was taken from an original TV episode of Bonanza, filmed over twenty years ago. There are many other scenes with horses and other animals. Some of this mild action includes horses walking, pulling wagons and being ridden.