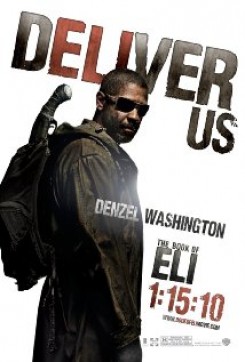 In the post-apocalyptic future, material possessions are used as money and water is scarce. But Eli (Denzel Washington) has a book that could save the human race. He travels cross-country with it, fighting to protect it from corrupt vigilantes and selfish survivors.

A hairless cat walks over to a dead body in the woods and sniffs it. A man hiding nearby shoots an arrow at the cat and hits it. The man walks over to the cat and picks it up. The cat hisses at the man, who proceeds to strangle the cat and then holds its lifeless body. This scene was filmed on a secured stage, and all the trees and rocks were props. Smoke and falling ash special effects were added in later, in post-production. Cat food was smeared on the fake dead body to entice the cat to approach and sniff it. A trainer stood behind the camera, holding a bait stick to get the cat to look and walk in various directions. A combination of a prop cat and computer-generated cat were used for the part of the scene in which the cat gets hit by the arrow, hisses at Eli and is strangled.

A cat stands in the middle of a table in a bar with a few men sitting around the table. A trainer placed the cat on the table and the actors around the table were instructed on the proper handling of the animal. Later, Eli pulls a cat pelt from his pocket and lays it on the bar for the bartender to look at. The cat jumps up on the bar and begins to sniff the pelt and Eli tries to push it off the bar. The cat hisses at him and jumps down. These scenes were filmed in separate shots. A trainer hiding behind the bar put the cat up on the bar (even though it appeared as if the cat jumped up). Once the cat was on the bar, a trainer used a buzzer to get the cat to walk to the prop pelt, which had been smeared with cat food to help entice the cat to check it out. The actor used an exaggerated "shooing" motion with his hand, being careful to not actually touch the cat. The exaggerated pantomime made it appear as if he was trying to shoo it away. The shot of the cat hissing was filmed separately — a trainer stood just off-camera and used a bait stick and hand signals to get the cat to look at the camera and hiss. A trainer then used a buzzer to cue the cat to jump off the bar and the cat was retrieved. The area was checked ahead of time for hazards and only necessary cast and crew were allowed on the closed set.

A rat crawls out of a hole in a wall and over to Eli, who hand-feeds it. This scene was filmed on a set with a fake wall with a hole in it. The trainer put the rat into the hole and used a buzzer and some food to cue the rat to come back out. A double filled in for the actor for the part in which he feeds the rat. He held some food in his hand and the rat approached him and ate from his hand. Before filming, the food was deemed safe for rat consumption, and the rat was only allowed a small amount to avoid overfeeding it. Trainers stood just off-camera and the set was open only to necessary cast and crew and checked for hazards ahead of time.

Solara (Mila Kunis) goes to a water enclosure to get some water. There are chickens, turkeys and pigs in cages in the background, and a small fire nearby. The trainer checked the cages and the area for safety ahead of time. The animals were put in comfortable cages that contained water and food. The fire was a controlled propane fire and actors stood in front of it to block it from the animals.

In one scene, several people and a few dogs wander down a street. One man has a dog on a leash as he walks through the town. A trainer handed the leash to the actor right before filming began. Two trainers hid behind a beat-up car parked on the side of the street and another trainer stood off-camera. The trainers behind the car released the dogs and the other trainer called to the dogs, which happily walked to him. The grounds were checked ahead of time for hazards and the street was closed to traffic.

There were several small fires in tires placed around the area and it was smoky. The nontoxic smoke was from a special effects smoke machine and the fires were small control bars inside the tires, controlled by off-screen crew members and kept a safe distance from the dogs.

Eli shoots a bird in flight and it falls to the ground dead. A combination of computer-generated imagery and a prop bird were used for this scene.

American Humane also monitored a scene with a vulture sitting on a concrete culvert, which was cut from the theatrical release but might come back on DVD.