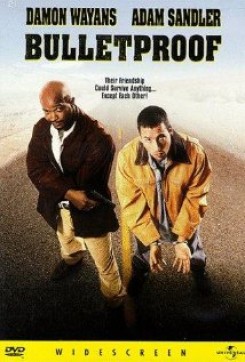 Bulletproof is a film about Jack Keats, an undercover police officer. Keats goes undercover for a year to bust a drug dealer and becomes best-friends with Archie Moses, one of the runners for the man in charge. After getting the necessary information, Keats attempts to arrest Moses. Moses accidentally shoots Keats in the head and gets away. He recovers and when Moses gets arrested, he only wants Keats to take him in to testify against the drug dealer. Unfortunately, the drug dealer has many informants and Jack and Moses end up running for their lives. Jack finally confronts the dealer and finds out who the real informant is.

When the dog is seen chasing a motorcycle, he was prepped prior to the scene. The dog ran 100ft. from point A to B where a food reward waited. The dog was released first and then the motorcycle proceeded and the stuntman paced himself according to the dog. In another scene the dog is seen jumping off a truck and bites a thug in the arm. Trainer #1, with the dog on a leash, places him on the roof of the car. The stuntman, wearing padding is on the other side of the car with his arm up so the dog can grab it. Trainer #2, positioned by the camera used voice commands to cue the dog to grab the stuntman's arm. Other animal action consists of the dog seen lying in the front seat of Moses car supposedly drunk. He is also seen sitting up, begging, playing dead, and licking the actor's face. There is a scene at the end of the film where the dog is seen sitting on a bar in Mexico drinking from a bowl. He then growls at some men and then a thud is heard and the dog is seen lying upside down on the bar. When the dog is seen growling at the men, the trainer placed a bone in front of the dog and used voiced commands to cue him to growl. He is then rewarded with food. For the shot of the dog lying upside down on the bar, the trainer placed him upside down and placed his head to the side and gave him a stay command. No actors were actually present for the shots of the dog. The substance that the dog was supposedly drinking was a mixture of beef and chicken broth.