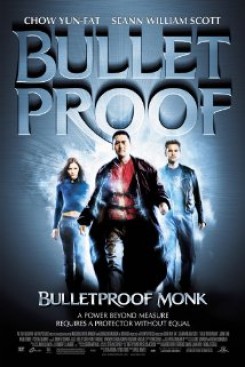 This kung-fu action flick starts in 1943 Tibet, where a nameless monk (Chow Yun-Fat) spars with his master on a mountain bridge. The monk proves to be a worthy adversary, and back at the monastery, the master appoints the monk the protector of a sacred scroll. However, Nazi troops suddenly arrive at the monastery, and the Nazi commander demands to have the scroll. The monk proves too quick an adversary for him, however, and escapes with the scroll. The story then jumps ahead in time and space to New York City, 2003. The nameless monk hasn't aged at all, but he is still on the run from those who would use the scroll for evil. He teams up with a street-wise punk named Kar (Seann William Scott) and begins to train him to be the next protector of the scroll.

Over the opening titles, we see a butterfly emerge from its cocoon on a wooden bridge. While this may look like a real butterfly, the entire sequence was actually accomplished through the magic of CGI (Computer-Generated Imagery).

In the opening sequence, we see a little boy with a monkey on his shoulder watching the two monks fight. While it looks like the boy and monkey are perched high above a steep cliff, they were actually on some large boulders that stood a mere 2-3 feet off the ground. In addition to this, the monkey (Kima) was held on an imperceptible harness at all times, and the monkey's wrangler and owner were just out of camera range, ready to reward the monkey for his performance.

A little later in the movie, the monkey takes part in the attack against the Nazis by leaping onto the Nazi commander and biting his face. While the man and the monkey may look like bitter enemies in the film, they had actually spent several days before filming getting used to each other. Kima practiced jumping from her owner's shoulder to the actor's shoulder, so when the time came for her to jump at the actor, it would seem perfectly natural to her. As a further precaution, both the owner and the wrangler were just off-camera during the shooting of the entire scene.

In the next scene, where the Nazi commander throws the monkey to the ground, the monkey's owner actually served as a double for the actor. The owner practiced playing with the monkey around his neck so the whole scene would just seem like a new game to her. In addition, several layers of soft mats were placed where the monkey would land, so she had an easy landing.

In some scenes at the monastery, you might be able to catch a glimpse of a Royal Tibetan Yak, some goats, and many chickens that were used, although most of their scenes were cut from the movie. All of these animals were well cared for by professional handlers, and provided plenty of food, water, and straw bedding. The yak and goats were led around on rope leads and were carefully watched over during the filming of the Nazi attack on the monastery.

Exotic Animals at the Mansion:

In one scene, Kar is sneaking through a large mansion and discovers several cages full of exotic animals. One of the cages has a rare snake called an albino cobra. To film this sequence, the actor reached toward the cage, and the snake snapped toward the glass as a natural reaction. This was filmed in three takes, and the snake never actually made contact with the glass.

Another of the cages has a bizarre-looking insect in it called an orchid mantis. This insect actually takes the form of an orchid, which accounts for its strange appearance. It was kept safe in its cage during filming.

There is also a brief scene at the mansion that shows the monk sitting with a few peaceful guard dogs. Originally, the dogs were going to be shown chasing after the monk before this scene, but the trainer of the dogs couldn't get them to run after the actor or even appear menacing. Thus, the scene was filmed as it is, with the dogs lying peacefully next to the actor.