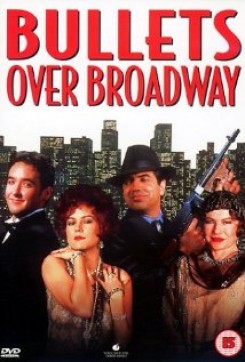 During the 1920's, David Shane is a young aspiring playwright who is about to embark on his first New York Broadway show and is fortunate enough to have the famous Helen Sinclair interested in the lead. However, there is one major problem, David needs financial backing for the show, but no one seems very eager to finance it. Upon the suggestion of a close friend, David agrees to submit his script and prospectus to Nick Valenti, a well-known king pin in the Mafia. Nick agrees to finance the entire production as long as his girlfriend, Olive, who up to this time has been a chorus girl in one of his burlesque clubs, gets a big part in the show. Nick and squeaky voiced Olive are thrilled that she is finally getting her big break. Needless to say she is a complete failure, but no one has the nerve to fire her. Nick assigns Cheech, one of his bodyguards, to go with Olive everyday to rehearsals. Ultimately, Cheech ends up helping rewrite the script. Although he and Olive have been very close, he cannot stand to see her ruining his new version of the play. One night, while driving Olive home, he detours to an isolated area of the East River, where he shoots and kills Olive and dumps her body into the river. The only person who truly misses Olive is Nick, but he is enough, as Cheech soon discovers. As the curtain is about to go up at the theater, Cheech is bumped off by Nick's henchmen.

Animal action is mild. A Chihuahua appears frequently in rehearsals as a pet of one of the actors. She carries the barking dog everywhere. There is a scene where one of the male leads, who has an eating disorder, is hiding in a closet. The dog jumps out of her owner's arms, and barks ferociously at the closet door where the fat actor is found eating a can of the dog's food. To get the dog to bark at the closet door, the trainer hid in the closet with food. When David hears of Olive's death, he is certain that Cheech has done the dirty deed. They meet at some stables where there are horses in the background. In other scenes, a woman is walking her two afghan hounds.. A horse drawn milk cart is seen in the background. Helen is also seen wearing a mink fur piece . This was obtained from the wardrobe department and had been used on other films.