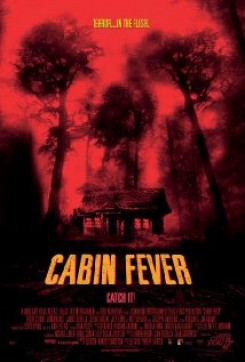 Five college friends head off to a cabin in the woods for a weekend of partying. As they sit at their campfire their first night, a blood-soaked man who has been infected with some disease that causes his skin to melt away confronts them. The next day one of the girls, Karen, becomes infected. They search for help and begin to realize they don't know who to trust.

The only live animal in this film is a dog. The dog is shown growling and chasing people as well as eating the bloody parts of a young girl in one scene. The other animals are props that appeared to be dead animals in the film.

The kids stop at a store and Paul approaches a young boy on a porch swing. The boy bites Paul's hand and he goes around the back of the building where there is a stream to wash off the blood. Two mixed breed dogs come running up to Paul as he kneels beside the stream. Paul extends his hand and pets the dogs. Two trainers released the dogs from off camera. The dogs were familiar with the actor and each other. The actor had some dog treats hidden his pockets that the dogs were shown right before the camera began to roll. The actor gave the treats to the dogs right after the scene was over. The trainers stood just off camera during the scene and retrieved the dogs afterwards.

Shortly after they arrive at the cabin, Burt decides to go out in the woods to shoot a squirrel. We see a squirrel in the woods and see Burt aim and shoot at it. The squirrel runs away.

As Bert stands by the truck and spits some blood on the ground we see it fall near a big black bug, which is crawling nearby.

As the group sits around the campfire a young man who goes by the name of Grim and his furry friend, Mr. Mambo, a German shepherd mix, come upon the campers. The dog barks and growls and Grim ties him to a nearby tree. The actor and dog were introduced before filming began. A trainer gave the actor the dogs' leash and they walked together a few feet in the woods. The actor tied the leash around a nearby tree. The trainer stood just off camera and used a combination of verbal cues and hand signals to get the dog to bark and growl.

As two of the young men are working on the truck outside the cabin, Mr. Mambo comes out of the woods and begins to snarl and growl at them. Marcy shoots a gun in the air from the porch and the dog runs back into the woods. This scene was filmed separately, without the actors present, and inserted into the film in post-production. A trainer stood in the woods, hidden from the camera, and released the dog. Another trainer stood near the camera and used a combination of verbal cues and hand signals to get the dog to run in the direction needed, snarl and growl. The gun that the actress shoots in the air was not loaded so no noise was made. That was added in later, in post-production.

Mr. Mambo chases Marcy to the shed behind the cabin where Karen is staying. We see the dog inside the shed eating what appears to be part of Karen's bloody stomach. Paul comes to the shed and the dog begins to chase him. A trainer released the dog and used hand signals to get the dog to run towards the actors. The bloody mess that the dog is eating off Karen's stomach is a special treat that the trainer made. The blood is corn syrup and food coloring with some chunks of meat and dog treats mixed in. As you can tell by watching the brief scene, the dog liked what it tasted. Later we see Mr. Mambo outside the shed and he is growling and tugging on something that is inside the shed. The actress isn't even in the shed in this scene. The trainer is on the other side of the door and is holding one of the dog's favorite rope toys. The dog has hold of the other end and is playing a game of tug-o-war with the trainer and on the screen it appears as if the dog is mad.

Animals That Are Not Real

In the opening sequence. a man carries a dead rabbit across a field to where a dead dog is laying. He tries to get the dog to eat the rabbit and then grabs the leg of the dog and moves it and the dog begins to open up.

Later, in another scene, Paul appears to hit a deer in one scene. The two front legs of the deer are through the windshield and still moving inside the truck. Paul grabs a shotgun and fires straight ahead at the unseen deer stuck on the hood and is splattered with blood. A company which specializes in special effects and building animatronics and creatures, made all of the above animals for this production and they appear to be very real.

The flies that appear around some of the dead bodies were computer generated.

In one scene a pig is hanging upside down. A woman slices the pig open and begins to gut it. We hear noises as if the pig is alive, but if you look closely, you will see that the pig never moves. There is a good reason for that. The dead pig was purchased by the production from a meat processing plant and transported on ice for this scene. The production provided American Humane with all the necessary receipts and paper work.