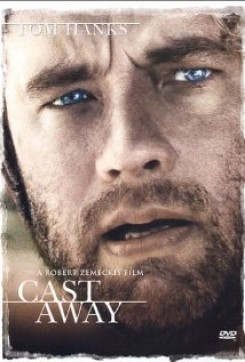 Tom Hanks plays Chuck Nolan, an overworked Fed Ex executive who finds himself stranded on a remote island after surviving a plane crash. Chuck, whose hectic job once forced him to live and die by time, now has all the time in the world—and he is left to wonder how much of it he has already squandered.

In the Russian saloon at the beginning of the film, there appears to be a stuffed bear poised near the entrance. This was supplied by a taxidermist and handled by the production's prop department.

On the island, Chuck holds a stick and scoots a live crab off of the pants leg of the dead pilot. The crab was an actual inhabitant of the island—Figi—and was untouched by Chuck's stick. The horseshoe crabs seen on the coconuts were also island dwellers. They were gathered on the beach by crew members, and let go after the scene was shot.

Later, Chuck's first attempt at spear fishing is a botched one, and the fish in the shallow water near the shore swim away unharmed. For this scene, the fish were gathered alive by a local fish wrangler and the camera captured images of them swimming in their natural environment. When Chuck drives the spear into water, the live fish aren't really there—they are computer generated and added in post production along with a shot of the live fish.

Frustrated and hungry, Chuck follows spear fishing with net fishing, and he manages to gather several small guppy-like fish in his net. Again, a local fish wrangler gathered the fish into a concentrated area, with none actually being taken from the water. Chuck, however, appears to take one of the small fish and place it into his mouth, eating it alive. The fish out of water was fake—made of rubber—and Hanks didn't actually put anything into his mouth. Instead, he used a sleight of hand to trick the audience into believing that he put the fish into his mouth.

For another meal, Chuck impales a live crab with his spear, tears off its leg, and watches juice drip from the severed limb. This was actually an animatronic crab, while the leg was a contraption made by the property master and filled with a food product consisting of egg whites and food coloring. Later, Chuck takes up spear fishing again, this time to successful results. Chuck, eyeing his prey in the water, deftly drives his spear down onto an unsuspecting fish, which writhes on the end of the stick. The fish was actually computer generated—as were the other fish seen in the water. Hanks drove his spear into empty waters, and the fish were added in later. Any speared fish seen out of the water were animatronic—no fish were harmed for the purpose of filming. Also, the whale seen during Chuck's escape from the island was actually computer generated.

The dog in the pick-up truck near the end of the film was cared for by an animal trainer, who ensured that it was safe and secure while the vehicle was in motion.