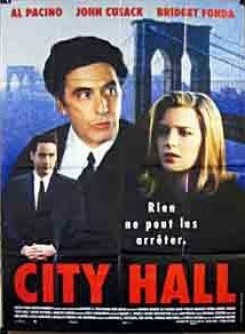 The conflict between political aspiration and idealism is the story of City Hall. John Pappas is the Mayor of New York City with an eye towards the office of the Presidency. His Deputy Mayor, Kevin Calhoun, is a young idealist in his thirties. In a sidewalk confrontation, Tino Zapatti, a drug dealer, exchanges gunfire with Detective Eddie Santos, killing the detective and a six-year-old black child. This incident necessitates a comprehensive investigation at a time when the Mayor is trying to get The Democratic Party to hold their presidential convention in New York City. A plot of mystery and intrigue evolves as an investigation is led by Kevin into the death of the child and Detective Santos. An attorney, Marybeth Cogan, representing the reputation of Detective Santos, relays her own suspicions to Kevin and they end up joining forces. Their joint investigation leads them to Abe Goodman, an employee in the probation department. It is from Abe that they discover the drug dealer was a nephew of the city's Mafia boss, Paulie Zapatti. He was on probation, but it is suspicious to them why he was on probation with his record, so the search continues. As a coverup is discovered, people are killed in the search for the real probation records on Tino. When the authentic probation report is uncovered, it reveals that Tino was actually sentenced to prison for several years, yet remained free in society. The Mayor's close friend, Judge Walter Stern, is responsible for Tino's false probation and freedom. As an indictment is being prepared, the Judge commits suicide to avoid disgrace. Frank Anselmo is a councilman and a middle man in the chain of corruption, payoffs and political favors. He works for Paulie Zapatti and is distressed when he hears on his car radio of the forthcoming indictment of Judge Stern, as he knows he will be next. After reaching home, Paulie Zapatti appears through a side door of his house and recommends that Frank take the same way out as Judge Stern -- suicide. Taking Paulie's advice, he goes for a ride in his car listening to his favorite operas, stops the car, and shoots himself. In the final moment between Kevin and Mayor Pappas, Kevin realizes that the Mayor was not protecting the Judge all this time just because they were friends, but because the Mayor, himself, was involved. The Mayor has used his idealism to do good things for the city, but as the Mayor reveals to Kevin, no one is pure for long in politics. The Mayor says he is going to resign, go to Greece to re-group for a year, and come back and run for another office. Kevin, although no longer naive, is still an undaunted idealist. He believes that men-in-power can make a difference, so as we last see him, he is handing out political leaflets in a bid to become a city councilman, himself.

Before his final meeting with Paulie Zapatti, Frank Anselmo approaches a small bird that is setting upon the top of its cage. Very gently, Frank takes the bird in his hand, places it on his finger and kisses it. He then gently puts the bird back in the cage.