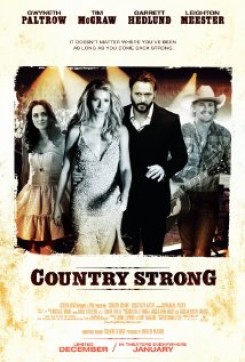 An unknown country-music songwriter (Garrett Hedlund) meets a famous country singer (Gwyneth Paltrow) in rehab. He tries to help her overcome her addiction and make a comeback.

A dog runs in front of a bar as Beau (Garrett Hedlund) exits. A trainer placed the dog on its mark and cued the dog to run to another trainer, who was waiting with a treat.

Kelly (Gwyneth Paltrow) keeps a bird in a box. There are several scenes in which she and James (Tim McGraw) hold the box or the bird in their hands, either petting or feeding it. A baby quail was placed in a small wooden box with sterile Spanish moss for a cushion. The box lid was closed right before the cameras rolled and kept closed only for a short time. When the lid was opened, the bird popped its head up toward the light. For scenes in which the bird is seen eating from an eyedropper, either the liquid was vitamin water or the dropper was empty. The quail was kept in a warm incubator until filming.

As Kelly sings a song on stage, a video shows a young girl interacting with a dog, cat and horse. This was a home video of the producer's daughter and the family's pets.

The birds that take flight during a funeral were coincidentally caught on film in their natural habitat.