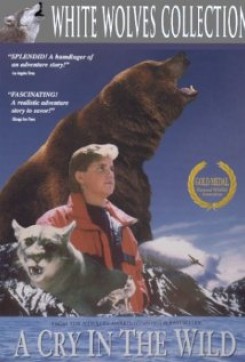 Cry In The Wild, A

Just before she puts him on a small plane bound for a vacation with his dad in the Canadian wilderness, a mother gives her thirteen year old son a present of a hatchet. The hatchet helps to save the boy's life after the pilot suffers a fatal heart attack and the plane goes down in a lake far from civilization. Raised in the city, Brian must learn through trial and error how to survive his lonely ordeal.

When Brian eats poisonous berries and becomes ill, he tries eating insects. After he wraps a leaf around the insect, the film is edited to see him putting the leaf in his mouth. Fake worms were also used. Brian is in competition for the good berries with other animals. After a raccoon steals his berries, Brian kicks what he thinks is the raccoon, and gets stuck with porcupine quills. The kick was feigned, fake quills were made from toothpicks, and the porcupine merely moved from Point A to Point B. For the scenes where Brian fishes with a crudely made spear, purchased fish were kept on ice then put on the end of the spear and held up. A taxidermied grouse was used for the bird that Brian spears.

A bear attacks Brian, first in the water, then again while he's sleeping. The trainer was a photo-double for the actor when the real bear was used. These scenes were edited with scenes of a man in a bear's suit. The suit was made from synthetic fur. When Brian shoves a flaming torch at the bear, it is the man in the bear suit. When the bear is impaled with an arrow, a balsa wood arrow was fitted on a harness and attached to the bear suit.