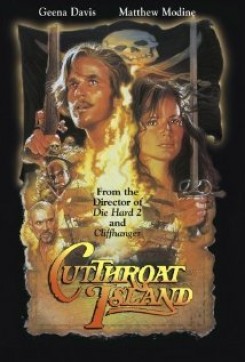 Cutthroat Island is a pirate adventure about Morgan Adams, a female pirate, King George, her trusty monkey, a ship, the Morning Star, and a piece of a treasure map. The Morning Star was left to her by her father, Pirate Captain Harry Adams, who was murdered by his brother, Dawg Brown. After the death of her father, Morgan convinces the crew to join her in finding the treasure. However, they are missing two pieces of the map which are in the possession of her two uncles, Mortichi, and Dawg. Since Morgan has vowed revenge upon Dawg for her father's death, she decides to get Mortichi's piece of the map first and try to convince him to join her against his brother. This way she can avenge her father's death and at the same time get Dawg's piece of the map. Because the map is in Latin, Morgan must find someone willing to cooperate with pirates who can translate the map but be expendable if they are too greedy. Morgan sails into Port Royal, Jamaica and discovers that the governor is planning an auction the next day and that Willy Shaw, presently in jail, will be auctioned off. The reports that she has received indicate that Willy can speak Latin. With this information, she gets dressed in all her female finery and pays a visit to him in prison. After seeing Willy, Morgan decides to purchase him at the auction. Unfortunately, Morgan is not the only one interested and a betting war begins between herself and another gentlemen. This brings attention to Morgan and her entourage, which in turn causes her to be recognized by one of the military personnel. Morgan pays for her purchase and the group separates, agreeing to meet at the ship. She takes Willy with her and a wild chase ensues as the two are pursued after stealing a carriage and four white horses. However, this is just the beginning of the adventure as they battle pirates on the high seas and on land before finally finding Cutthroat Island and the treasure.

The monkey, King George, is seen throughout the film doing a variety of tricks, such as sitting on a cage, putting his hands over his mouth, saluting, running down a table, sitting on an actor's shoulder as they are walking, picking up various objects, lifting up a lid and poking his head out, holding a prop gun and supposedly loading a gun. The monkey was trained for all of his behavioral stunts in pre-production. His trainer placed him on his mark using verbal and visual commands to cue him with food as a reward. When Morgan is being chased by the military, she steals a carriage and she and Willy race through the village. Lt. Trotter leads the military on horseback as they pursue Morgan and Willy past street vendors, livestock and peasants, causing havoc in the streets. A street vendor's fish cart is overturned as soldiers chase the carriage. Two soldiers ride up alongside the carriage and jump from their horses onto the vehicle. A horse is seen hitting a cart and the cart breaks apart as it makes contact with the horse's chest. In another scene, Morgan goes to a pirate island looking for her uncle Mortichi. Upon arriving, she finds out that Dawg is also there, so she disguises herself as a prostitute and goes in search of Mortichi. While walking through the streets of the pirate community, they pass vendors in the streets. A fish vendor is seen cutting off the head of a dead fish, and a man holds a large snake in the air. The snake was animatronic. There is a scene where Mr. Reid, a traitor on board Morgan's ship, successfully copies the map. He is seen afterwards releasing a pigeon. There is another scene on the island when Dawg catches Morgan and trys to find out where the treasure is hidden. He ties her down to stakes in the sand and applies maggots to her back to coerce her into talking. When they arrive on the island, various exotic animal sounds are heard in the background. Turtles, a snake and a lizard are seen crawling on the ground in various scenes. In another scene on the island, Morgan finds Willy in the cave with the treasure. The tide has come in and all that can be seen of him is his head with a rat crawling on it. As Morgan rescues Willy, other rats are seen crawling on the crates of treasure around him. There is a scene when Dawg is sleeping and a spider is seen crawling up his chest. He grabs the spider and later opens his hand and all that is seen is blood on his palm, giving the appearance that the insect was crushed. Cutthroat Island was filmed on location in Malta and Thailand. American Humane was not present on the set but verified the animal action involving the monkey, with his trainer. This action was done according to American Humane Association Guidelines. However, after repeated attempts to contact the other various trainers who handled the other animals and receiving no response, we must rate Cutthroat Island "Questionable" because of the horse action.