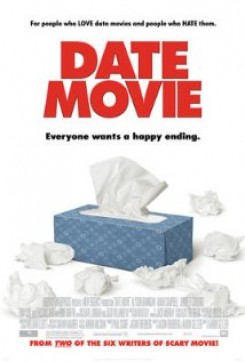 Created by members of the Scary Movie writing team, this film spoofs date movies throughout the ages. Julia Jones (Alyson Hannigan) is an overweight young woman who meets the man of her dreams as she waits tables in her family's Greek restaurant. Thanks to a physical transformation à la MTV's Pimp My Ride, Julia and Grant (Adam Campbell) embark on a classic whirlwind courtship. But will a sexy siren from her fiancé's recent past destroy Julia's newfound happiness?

In one scene, Julia peers into her elderly neighbor's window and watches the woman as she knits and chats with her clutter of cats. Suddenly, a cat flies back and forth in front of the window, and at one moment, two cats collide in mid-air. Trainers positioned the cats around the room on furniture, at the windowsill, and on the woman's chair and cued them to stay. The projectile feline and the mid-air collision were achieved by tossing fake stuffed animals in the air.

In a scene that spoofs ABC's hit show The Bachelor, real-life host Chris Harrison interviews Grant, who utters a double-entendre while picking up a rooster. For this shot, the animal trainer lay on the ground below frame and handed the rooster to Campbell on cue.

Taking the urn scene from Meet the Parents to a new level of grossness, a Himalayan cat named "Jinxers" crawls on dead granny and proceeds to lick the corpse's mouth. Handlers buzzer-trained the cat to walk across the rubber corpse and had placed baby food on the dummy's tongue to encourage the licking action. During some takes, the cat spontaneously decided to lie down on the dummy's chest, which led to the suggestive action performed by an animatronic cat as the scene continued. As a safety precaution, a path in the plaster urn debris was cleared for the cat's entrance, and the animal stayed at least three feet away at all times from the flames burning in the grate-covered fireplace.

Trainers used a buzzer to cue the real cat for the long run to the bathroom and the jump on the toilet. An animatronic cat was then used to portray Jinxers as having something akin to irritable bowel syndrome.

Later, Julia holds a plastic bag containing a goldfish while riding in the elevator with Grant and an amorous deaf couple. The actors first rehearsed the scene without the fish, which was kept on location in a small aerated tank. When needed for filming, the goldfish was placed in a bag with treated water from the tank and handed to the actress, who protected the fish from being jostled by the robustly romantic duo.

At the wedding ceremony, two horses pull a carriage driven by a wrangler. In addition to this mild action, the filmmakers shot more intense horse work involving a stunt rider and a "dummy" Julia dragging behind the horses. Though this version of the scene was cut from the theatrical release, our Safety Representatives monitored the action completely to ensure that all Guidelines were followed.