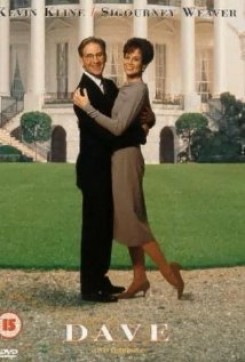 Dave is a farcical comedy involving Dave Kovic, the owner of a small-time temp agency, and how he gets involved in a government cover-up. Dave is not only a dead ringer for the President of the United States, William Harrison Mitchell, but also has the President's voice and mannerisms down pat. Occasionally Dave appears at local functions playing the part of President Mitchell. With the exception of public appearances, the President and the First Lady have not been close for some time. Needless to say, he has had numerous affairs during his term in office, most of them with his secretaries. On one of these occasions, while in the middle of making love, he has a near terminal stroke, leaving him in a coma. The White House Chief of Staff, Bob Alexander, and the Media Advisor, Alan Reed, quickly cover up this occurrence, claiming the President just had a minor stroke and should be up and around in no time. Bob and Alan have plans of their own. With the President in a coma, Dave takes over! We watch as Dave, with the aid of the First Lady, runs the country better than the real President.

Animal action is minimal. In one scene Dave, while doing a Chevrolet commercial as the fake President, rides a large pig out onto a platform led on a rope by a little girl. This scene was shot in cuts. The pig followed hand and verbal commands given by his off camera trainer to walk out onto the platform and stay. The trainer then led the pig back off the stage with food as a reward. The President has two little dogs that are present in two scenes. In one scene they are walked into the White House on their leashes. In the other scene Dave plays and rolls around with the dogs on the White House lawn.