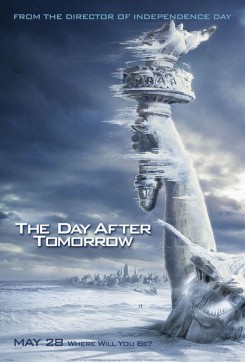 Day After Tomorrow, The

Are we on the brink of a new Ice Age? This is the question that haunts climatologist Jack Hall (Quaid), whose research indicates that global warming could trigger an abrupt and catastrophic shift in the planet's climate. While Jack warns the White House of the impending climate shift, his 17 year-old son Sam (Gyllenhaal) finds himself trapped in New York City where he and some friends have been competing in a high school academic competition. He must now cope with the severe flooding and plummeting temperatures in Manhattan. Having taken refuge inside the Manhattan Public Library, Sam manages to reach his father by phone. Jack only has time for one warning: stay inside at all costs. As full-scale, massive evacuations to the south begin, Jack heads north to New York City to save Sam. But not even Jack is prepared for what is about to happen—to him, to his son, and to the planet.

Buddha, the homeless man Luther's best friend, was played by a black and white border collie/Australian shepherd mix. Two trainers stood nearby off camera throughout the entire shoot, and a vet was also on set at all times. The trainers used a combination of hand signals and verbal cues to get the dog to achieve most of the action, which included walking with the actors, lying near them, and running out of and back into a scene. At the end of the film, when the survivors are rescued by helicopter, Luther holds Buddha as the chopper hovers over the ground. According to production, a fake helicopter was filmed in front of a blue screen to make it look like the chopper was in flight.

Trainers brought four wolves to the set of The Day After Tomorrow. The wolves are seen in a cage at the zoo, running in the snow, and inside a medical building when they chase Sam and two other men. Sam slams the door in front of a charging wolf and the animal jumps up against the window of the door, leaving a smear of blood on the glass. A wolf also attacks one of the men's legs.

Production told American Humane that these scenes were filmed using real wolves, and then later, in post production, CG wolves were substituted. A trainer put the wolves inside the cages and stood off to the side while the animals acted naturally. The director was disappointed at how calm the wolves were; Emmerich wanted them to snarl and fight with each other, but the wrangler said that they would not behave that way since they were from the same pack. Scenes of the wolves walking through snow and chasing Sam and the other men were computer generated, as was the wolf that jumped against the window.

The wolf attack was shot twice — according to the assistant director — once with a real wolf and later with an animatronic wolf head made by the props department. To achieve the attack action, the actor wore padding under his pants and the wolf was cued to grab his leg. The trainer stood behind the cameraman wearing a padded sleeve and shaking it around to make the wolf snarl and grab for his arm. The A.D. said they used the animatronic wolf head in the final print. You be the judge: real wolf or movie magic?

A shepherd and his herd are seen near a weather center in Scotland in one brief scene. The owner of the herd doubled as an actor for this shot, and it is interesting to note that the he is also a judge in local sheep herding contests.

The sea lion appearing in the zoo sequence is actually in its natural environment at the Central Park Zoo in New York City. The building seen at the zoo, however, was a set built by production with input from the animal wranglers. A black bear, some deer, a bison, a reindeer and the wolves appear in these cages, and trainers placed the animals in the cages one at a time, making sure that they could not see each other and become unduly stressed. Trainers stayed in the cages, hidden from the camera, at all times during the filming of this scene.