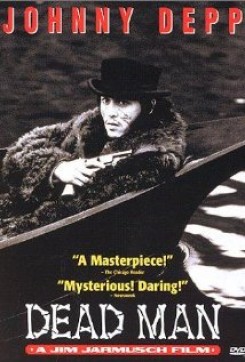 Dead Man is the story about a man, William Blake and his journey towards a new life. The story unfolds as Blake is first introduced to the rough life of the West, as he travels by train to Machine Town where he expects to start a new job. Upon his arrival in town, he is amazed by the lack of civility amongst the people, both male and female. When he reaches his place of employment, Blake finds out that his job was given to someone else. This leaves him destitute because he had used all of his money for the journey. After wandering through the streets, he enters a saloon to purchase a bottle of liquor with his last remaining money. While sitting outside the saloon, a woman, Thel Russell, is rudely pushed into the street by an inebriated trapper. Blake approaches Thel, helps her collect her belongings, and walks her home. Thel invites Blake in for a drink and he ends up spending the night. The next morning, Blake and Thel are interrupted by Thel's finance, Charlie, as he walks into her room. An argument ensues and Charlie pulls out a gun, intending to shoot Blake, but Thel throws herself in the line of fire and the bullet hits her first before hitting Blake. Blake then shoots Charlie with Thel's gun. After realizing what has happened, Blake collects his belongings and exits through a window, landing in the street. He steals a Palomino horse and rides out into the wilderness. It is when he enters the forest that he meets an Indian named Nobody who helps him with his wound and guides him on his journey. In the meantime, back in town, Charlie's father hires three gunmen to track and kill Blake and to also bring back the Palomino which he owns. During this time, wanted posters are put up all over the county. Trackers, marshals, and individual men with guns all start to hunt Blake for the bounty money. There is much bloodshed before Blake's journey ends.

When Blake is journeying through the forest, he comes upon a deer on the ground, dead from a gunshot wound to the chest. Blake touches the wound, looks at the blood on his fingers and then rubs it onto his chest. He rubs the deer's wound again, then lays down beside the animal as if to cuddle it. The fawn carcass used was a road kill loaned to the production company by the Wildlife Images Rehabilitation & Education Center. After filming, the carcass was returned to the Center. Horses are seen throughout. There are many scenes where Nobody and Blake are seen slowly riding their horses and leading a pack mule through the woods. In several other scenes, riders are seen walking their horses through the woods in search of Blake. Horses and pack mules are also seen in many scenes as background or atmosphere.