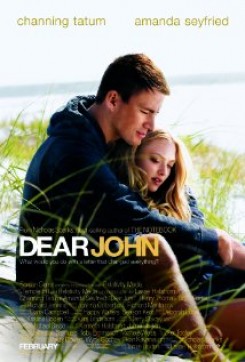 After a two-week whirlwind romance, two lovers agree to write each other letters detailing their lives while John (Channing Tatum) spends his last 12 months of military duty overseas and Savannah (Amanda Seyfried) finishes college. But their long-distance love will be tested when John considers re-enlisting and going back overseas for two years.

In several scenes, Savannah grooms and pets her horse or rides it, along with her neighbor's son, a short distance. At one point, the neighbor's son hand feeds the horse. Horses are also seen in the background in a brief scene outside Savannah's ranch house. The horses at the ranch lived there and were accustomed to the mild action. In certain scenes, they were filmed doing whatever came naturally. For the riding scenes, the adult and child actors were both extremely well-rehearsed and instructed on how to handle and ride a horse, and trainers stood nearby to guide them. The coral and field were fenced in, and the grounds were checked for hazards.

In scenes at the various villages where John's military unit lives, horses, goats, chickens, cattle and other farm animals are seen milling about. A villager is later seen leading a camel by a rope. A horse-drawn wagon rolls down the street in one brief scene. For all this background action, several costumed trainers were scattered in and around the scene, and animals were allowed to graze on hay, were kept in small enclosures or were haltered or held. Chickens were either tethered or kept close to costumed trainers. All action was brief and mild, and the animals were accustomed to it.

At a party near the beach, a dog walks from one point to another. Later, the same dog runs to Savannah's house from a neighbor's house. For this mild action, one trainer placed the dog on its mark while another called the dog to its end mark, retrieving it and rewarding it right after. Grounds were checked for hazards and the cast and crew were instructed on the dog's proper handling.

The fish seen under the pier were filmed in their natural environment.