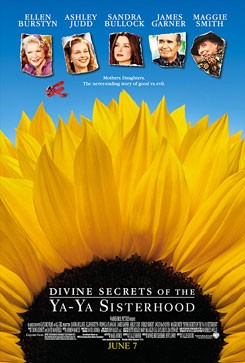 Divine Secrets of The Ya-Ya Sisterhood

After years of mother-daughter tension, Siddalee receives a scrapbook detailing the wild adventures of the "Ya-Yas", her mother's girlhood friends.

American Humane Association did not supervise Divine Secrets of the Ya-Ya Sisterhood on set, but was notified about the production and discussed the animal action during filming. After screening the film, AHA obtained supplemental documentation from the distributor and production. AHA is rating the film Believed Acceptable based on this information. Animal Action Chickens walk around in front of the Ya-Yas ranch house. Later, during an outdoor celebration, a pony is ridden in the background and a child pets a rabbit. For each of these mild scenes, a trainer placed the animals on their marks and stood close-by to supervise. The trainer retrieved the animals once the scene was complete.