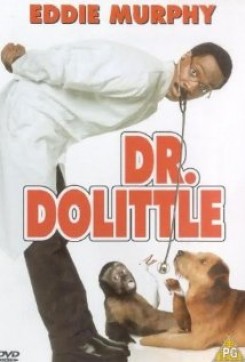 Dr. Dolittle is the newest version of the delightful premise that humans can actually talk to animals. In this case it is Dr. John Dolittle - successful medical doctor, married to a beautiful woman, with two adorable children, and about to sign the biggest financial deal of his life. Then, most strangely, he begins to hear voices, animal voices. Then he begins to answer them, casting a dubious light on his mental health and sending his perfect life straight to the doghouse.

How did Dr. Dolittle's co-star, Lucky, start in the business?

The clever animal actor named Sammy, aka Lucky, wasn't always living in the lap of stardom. Sam was discovered by a trainer from Birds & Animals Unlimited, at the East Valley Shelter in Los Angeles.

Shelter dog makes good! Sam is approximately five to six years old and is a multi-cultural canine. One of his trainers, Mark Forbes, claims that Sam has exceptional intelligence in that he was able to learn behaviors in a very short amount of time. "Not that all dogs aren't capable of learning these things", noted Stacy Basil, one of Sam's handlers. "Most dog owners have a diamond in the rough right in their backyards. All they need to do is polish it up."

Sam was trained to go with the actor and simultaneously look back and forth and move his jaw as if speaking. Stacy compared this, in human trick terms, to walking, talking, nodding, chewing gum, rubbing your stomach and patting your head all at the same time. Applause for Sam! Dolittle is the newest version of the delightful premise that humans can actually talk to animals.

A large variety of animal characters appear in this comedy and converse with the doctor creating havoc in his career and family. Along with the live animal actors, the movie utilizes special techniques including animatronics, blue screen, split screen and computerized digital effects.

The large variety of animals in Dr. Dolittle required months of pre-production planning and patient training. Trainers use natural training methods that involve studying the behavioral characteristics of each species and the unique traits and temperament of each individual animal. The animals learned to respond to voice, sound and hand commands and were rewarded with their favorite foods.

Several scenes required a large number of animals to be present on set together. Weeks prior to filming, these animals were prepped to become accustomed to working together. As many as 45 trainers were present for a single scene to provide adequate care and focus for the animals. Awareness of natural predator/prey situations prompted special attention. In scenes where the owl appears to be in the same area with natural prey, such as small rabbits or birds, the owl was filmed separately for maximum safety.

One of the newest technological innovations is 2-D imaging used to create the illusion that the animals are actually talking. The animals are filmed moving their mouths naturally and in post production the movements were manipulated frame by frame to make it seem as if the animal is forming the words with its own teeth, lips and tongue. This differs from the imaging done on the film Babe where all the animal mouths were 3-D images. For Babe, computer generated mouths were superimposed on the animal actors. Although that technology was advanced for its day, the newer, more precise 2-D imaging in Dolittle takes the animals to a new level of photo-reality.

Many of the scenes call for an animal's animal-tronic double to step in and do the work. Rodney, the pet guinea pig has such a double for scenes that would have been dangerous for the real animal. When Rodney rides on top of the moving vehicle or has a mishap in the ladies room, an animatronic is used. Rodney was a well-trained animal and did have many behaviors to his credit – biting his cage, moving to specific placement marks and sitting up on cue. However, he also had live guinea pig doubles too. Several guinea pigs were trained so that each one specialized in a different behavior.

Other animals that had specially designed matching animatronic doubles were Lucky the dog, the rat, the owl, the tiger, and the pigeons. Many of the animals also had multiple live doubles allowing them to be rotated and rested often.

For a variety of reasons, such as predator/prey situations or for scenes where the animal appears to be in a dangerous place like the tiger on the ledge, the blue screen technique is used. The animals are individually filmed against a blue background.

During editing, their image is superimposed into the desired setting. Similarly, the animals, or animal and the animatronic double, can be separately filmed in the same environment. During post-production, the two halves are seamlessly edited together to make it appear as if the animals are together on screen.

Special equipment such as unique harnesses, were designed to create some of the illusions. One of these was fashioned for the dog that appears to be dragged by the collar into the vet's office. This harness was created to distribute the dog's weight between the area at the back of his neck and his hind area as he was pulled in a seated position. The dog was conditioned to this action and equipment in pre-production. Another special harness was developed Lucky to safely ride in the passenger seat of the car.

Dr. Dolittle is an example of filmmaking that utilizes talented animal actors and advanced movie magic.