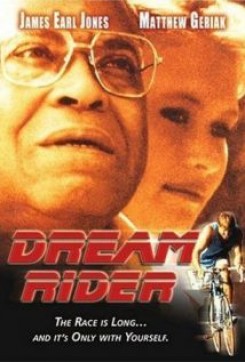 Based on real life incidents, Dreamrider is the inspirational story of a courageous young man who fights to lead a normal life again after he is nearly destroyed by several tragic accidents.

On his eighteenth birthday, Bruce Jennings is out with a friend riding his new motorcycle, a present from his parents. They have a minor accident with a car driven by a drunk driver. While Bruce is still on the road, a police car in pursuit of the drunk driver, hits Bruce, who sustains massive injuries. He's in a coma and is given his last rights by a priest, but his family will not give up hope for him. After months in a coma, Bruce's leg is amputated and one week later, on Christmas, he comes out of the coma. Bruce must cope with the depression and anger at his circumstances and at first rejects the notion of an artificial leg. Then, two weeks before graduation, he decides that he wants to receive his diploma walking on his own, without crutches. He works hard to achieve his goal and succeeds, receiving a standing ovation from his fellow students.

Bruce is making excellent physical progress when he is felled by another accident. While pedaling his bicycle down a city street, someone swings open a car door, throwing him into the path of another car, which runs over him. This time he loses a kidney and breaks his good leg so severely that he requires a brace and several months in a convalescent home. Bruce sinks into a severe depression and feels that God must be punishing him. A priest councils him and introduces him to another resident at the home, Mr. Perry, who was paralyzed 21 years ago in a car accident that took the lives of his entire family. Mr. Perry is an extraordinary man who, despite his circumstances, refuses any negative thought. He teaches Bruce never to waste time and never to say "I don't know". He inspires Bruce to set a goal for himself. Bruce will pedal his bicycle 3,000 miles from California to Boston, unescorted, with only his dog, Harry, for companionship!

Harry is an important part of Bruce's recovery as Harry takes Bruce's mind off himself. There are scenes of the two playing together and various shots of Harry running beside, behind, or in a box placed on the back of Bruce's bike. Bruce has one minor accident during their cross-country trek, but little detail is shown, as the scene is very brief and is shot in cuts. Harry is not seen at all. When the pair finally reach Boston, Bruce is mugged. Harry attacks the mugger and chases him away. The mugger was portrayed by the dog's trainer, and rather than attacking, the dog was really playing with his trainer. Pigeons seen on the Boston Common were not actors, but native Bostonians. A fake dog was sometimes filmed riding in the bicycle back seat.