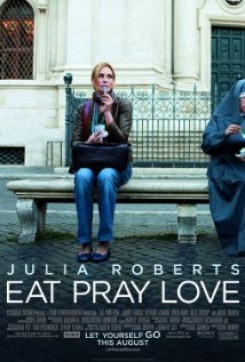 A married woman realizes how unhappy her marriage really is, and that her life needs to go in a different direction. After a painful divorce, she takes off on a round-the-world journey to "find herself".

Even though the production complied in submitting the required paperwork and a prerelease screening, it did not establish a contract for the supervision of animals filmed outside the U.S., and therefore did not earn an end-credit disclaimer.

*This situation is different from the standard "Special Circumstances" rating.

American Humane Certified Animal Safety Representatives™ were unable to directly supervise all of the animal action in Eat Pray Love because most of the animal action was filmed outside the U.S. and the production did not establish a contract for our oversight. Safety representatives did not monitor any of the scenes filmed outside the country but did monitor two brief and mild scenes involving animals that were filmed in the U.S. Only one of those scenes appeared in the theatrical release — a mild scene in which a woman sits with her leashed dog by a tree in Central Park while another leashed dog walks by with its owner. Scenes that we did not monitor include mild to moderate action with birds, ducks, a dog, oxen, camels, elephants, chickens and a monkey.

American Humane requested information regarding the animal action, along with a prerelease screening of the film, both of which Columbia Pictures cooperatively provided.