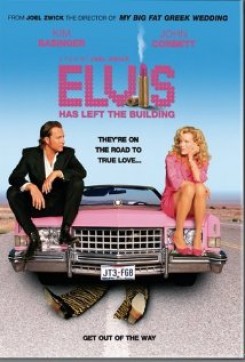 Elvis Has Left The Building

Kim Basinger stars as Harmony, a Mary Kay cosmetics saleswoman strangely linked to Elvis Presley since her birth at an Elvis concert. After she accidentally runs over two Presley impersonators, Harmony winds up fleeing from the Feds in the company of a bored New York advertising executive (John Corbett). The pair wind up in Las Vegas for a big climax at – where else? – an Elvis convention.

In a cameo role, director Joel Zwick appears as an Elvis impersonator. A large, freestanding convenience store sign falls on him and kills him. As the dead impersonator's head pokes out from a hole in the sign, a yellow Labrador retriever licks his face. The sign was propped up around Zwick with empty apple crates to alleviate the weight and help keep it stable for the dog to approach. A trainer smeared peanut butter on the director's face for the dog to lick off, and two handlers stood just out of frame to retrieve the dog afterward.

Stuffed animals that appear around a bar were the actual décor of the location in which the scene was filmed. Production crafted the fake spider that gets squished in a car in one scene.