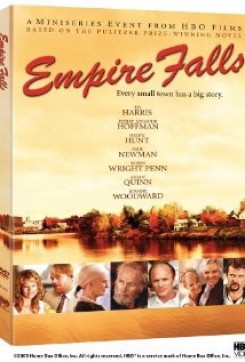 In the blue-collar mill town of Empire Falls, Maine, the relationships of two very different—yet entwined—families play out in this adaptation of Richard Russo's 2002 Pulitzer Prize-winning novel.

During a scene in the Whiting's parlor, Timmy the cat bats and hisses at Miles (Harris) when he enters the room with Cindy (Robin Wright-Penn). The actress picks up Timmy and holds him until a distant chime lures him away. For this sequence, a trainer placed the cat on an armoire and verbally cued him to stay. Attracted by a bait stick that the trainer waved off camera, the cat naturally extended a paw in a swatting motion as Harris walked in. The actress picked up the cat and let him jump to the floor when a crew member used a clicker to call Timmy out of frame.

Timmy is next seen clinging to the screen door. As Miles walks by, the cat meows and scratches his hand. Cindy then extracts Timmy from the screen and holds him while Miles goes outside. For this series of shots, Timmy's hind legs rested on the door's wooden divider, and by waving the bait stick above the cat's head, the trainer got him to crawl up the screen. The scratching action was an insert shot achieved like the previously described swat. The trainer, who stood two feet away throughout this scene, held Timmy and handed him to the actress to conclude the action.

At the cemetery, a grey cat – presumably Timmy – sits on a tombstone and runs away when Miles and Cindy see him. For the first part of the scene, the trainer placed a nylon waist tie on the cat's hindquarters and settled him into position on top of the fake grave marker; a sandbag hidden behind the tombstone weighed down the waist tie and kept the cat in place. This cat had been well prepped with the waist tie, and the sandbag was released between takes. After the waist tie was removed, the handler used a clicker to cue the cat to go to an end mark 10 feet away and provided a food reward.

While locked inside a black sedan, Timmy paces on the front and back seats meowing in displeasure. For this scene, after placing the cat in the car with one window cracked for fresh air, the trainer ran back and forth tapping the glass with a food reward in hand. The cat moved about the car in an attempt to get the reward and meowed on its own accord.

At the end of the film, the cat cries as he stands on a table in the gazebo during a rain storm. Trainers placed Timmy on the table in a stay position and remained five feet from the gazebo during filming. As a safety precaution, several crew members were in the immediate area to safely capture the cat if needed.

In two scenes, John Voss approaches a scruffy dog staked in his yard. The boy picks up a stick each time, and the dog whines softly when John draws near. Both times, the dog wore a six-foot chain link lead fastened to a stake. An assistant trainer hid inside the house while the main handler stood next to the camera about five feet from the dog. On action, the trainer called the dog and showed him a treat to elicit the desired vocal effect.

In one scene, an officer walks with a leashed police dog on Voss's property. The dog sniffs and bites a yellow jacket and walks off screen. A real Maine state police officer brought the police dog to set and verbally cued the K-9 officer to sniff and bite the garment and walk with him across the yard.