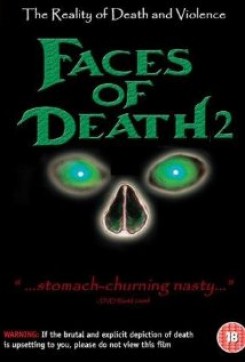 Faces of Death Parts I & II

This movie continues in the same vein as F.O.D. 1 with short scenes of death related material. Mortuarys, accidents, police work are filmed by TV crews and home video cameras. Some of the material are most likely fake, some not as likely.

In the films, numerous animals are brutally murdered on camera. They include dogs killed in dog fights; bulls; a sea otter; a shark; an alligator is shot; seals are hunted; and one monkey is beaten to death and his brains are eaten. In an International Press Release issued in 1978, AHA urged a boycott of Faces of Death due to its blatantly inhumane content. The ongoing expansion of the AHA Guidelines for the Safe Use of Animals in Filmed Media has raised the standard of care for animal actors worldwide. In addition, technological advancements have created safe alternatives to risky action, enabling filmmakers to maintain their creative vision without compromising the welfare of animal actors. AHA continues to be a vigilant watchdog for animals in film and television and acknowledges the groundbreaking history of this program while expanding and refining procedures to reflect increased knowledge and new challenges.