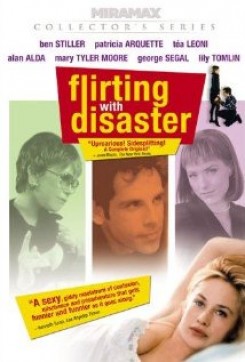 Flirting With Disaster is a comedic tale of a new father, Mel Copeland, who decides he must absolutely find his biological parents before he and his wife, Nancy, can name their four month old son. Nancy is more interested in resuming their sex life, and is in the process of seducing her husband when Tina Kalb arrives from the adoption agency to tell Mel they have located his biological mother. She asks permission to accompany Mel and Nancy to Florida and document the reunion between mother and son on videotape. So Nancy, Mel, infant son, and Tina set off for Florida to meet Mel's mother, Valerie Sweeney. Valerie is not what he expected. She regards herself as a daughter of the Confederacy and wants to name the baby Beauragarde. However, while still in Florida, Tina discovers from her agency that there was a mix-up about Mel's birth year and Valerie is not his mother. It's a close call for Nancy and Mel because Valerie was the political opposite of them. They are sophisticated liberals from New York City. When Valerie hears the news, she takes back the gifts she has given Mel and loses her southern hospitality as she sees them to the door. Tina phones her agency again and the group is off to see his real mother and father in Michigan. They arrive, unannounced, at a junkyard and find two scruffy-looking, middle-aged, macho men who are preparing to leave on a three-week trip in a loaded semi-truck. One of the men, Fritz, begins to hit Mel before he can say anything, but is stopped when he is told Mel thinks he is his father. Fritz tells Mel that he and his mother met and were married in the 60's when they were members of the Hells' Angels. Later on, his mother ran away with the man who is really Mel's biological father. They are now living in New Mexico. Still Fritz wants to show him how to drive a rig and gives him a lesson which ends up in an accident with the two men in jail. Nancy and Tina go to the jail to secure the release of Mel. While at the police station, Nancy runs into a former high school classmate named Tony. Tony is elated to see her and wild about the baby. He is also the lover of the arresting officer, Paul, and talks him into dropping the charges. The group ends up socializing at dinner and Nancy tells Tony about the meeting they are going to in New Mexico. Tony and Paul impulsively decide to go on the trip with them. At the airport, they rent two cars and drive to a bed and breakfast inn for the night. Finally, in the desert, they arrive at the large home of Mary and Richard. They had been expecting Mel and are so happy to meet their son, they willingly accept Tony and Paul as guests, also. Mary and Richard are eccentric 60's dropouts. Richard is a sculptor and Mary a potter. They gave Mel up for adoption when they went to jail for ten years for making and selling LSD. Mel also meets his weird half-brother, Lonnie, who is instantly jealous of Mel. So, when Lonnie cooks dinner for everyone, he puts LSD in the food meant for Mel, but Paul mistakenly eats the food with the LSD. Mel discovers that his parents are also making LSD on the premises. Mary and Richard monitor Paul who reveals that he is a cop. This is enough to panic Mary, Lonnie and Richard. Meanwhile Mel's adoptive parents have been concerned about him and arrive as his real parents are leaving the house, bound for Mexico. Their cars collide and both sets of parents end up in jail until Paul, who has by now recovered from LSD, uses his badge and influence to get them out of jail. Mary, Richard, and Lonnie are quickly off to Mexico with as much LSD as they can carry. Nancy and Mel finally have a name for their son. They name him Garcia, after Jerry Garcia of The Grateful Dead, the favorite band of Mary and Richard in the 60's.

During the beginning credits, a woman is seen on the street walking four small white poodles. Each poodle has its own leash and collar, leading to one leash controlled by the woman. When Mel is at the bed and breakfast inn in Antelope Wells, New Mexico searching for his biological parents, he is met by a cat who hisses at him. Mel kicks toward the cat, but makes no contact. Later as he tries to make a phone call, the proprietor of the bed and breakfast inn approaches him with the same cat in her arms.