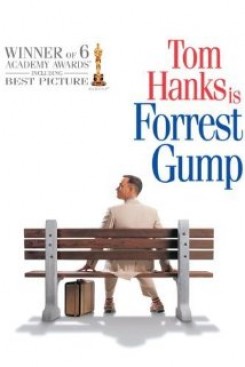 Forrest Gump is the heart-warming story of one young man's life as he grows up in Greenbow Alabama. Forrest is a "slow" little boy, but his mother insists he get the same education and treatment as any other child. Since Forrest's IQ. is only 75, and the state requires a score of at least 80 to attend public school, it takes quite a bit of creativity on Forrest's mother's part, but she manages to get Forrest enrolled in school. School is just the beginning for Forrest, as he is quite a special person. He turns out to be the fastest runner in all of Alabama and wins a football scholarship to college. From that point on Forrest is indirectly and inadvertently involved in a number of historical events, including things like showing Elvis how to dance, helping John Lennon write a song, being awarded the Medal of Honor in the Viet Nam War and meeting the President of the United States. He also becomes a millionaire by starting a shrimp boating business. Unknowingly, Forrest seems to touch everyone's life with whom he comes in contact. All the while Forrest is in love with Jenny, his first friend and love from elementary school. Their paths cross periodically throughout their lives, but they go their separate ways. Jenny finally sends Forrest a letter asking him to come visit her. Overwhelmed, Forrest rushes to be with his Jenny. When he arrives, he meets Jenny's 4-year-old son, Forrest. Forrest says to Jenny "His name is Forrest too?". Jenny replies that she named him after his father. After a little explaining, Forrest finally realizes that he has a son. Jenny has called Forrest for another reason as well. She tells Forrest that she has a virus and is going to die. She then asks Forrest if he will marry her. As she is the love of his life, he agrees. The three return to Alabama and are married, Jenny living out the remainder of her days with her loving husband and son.

Animal action is mild. In the scenes when Forrest starts up his shrimping business, hundreds of shrimp are seen being released from a net onto the deck of his boat. These were purchased dead shrimp from a local fish market. Other animal action includes cows grazing in a pasture and men riding on horseback. A dog on a leash is also seen barking in the background.