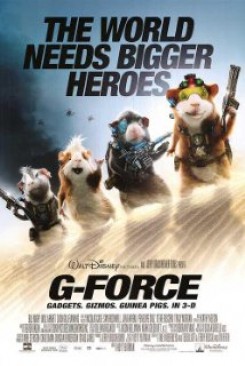 Specially trained, genetically engineered guinea pigs discover a plot by an evil mogul to rule the world using household gadgets. The animals set out to stop the villain's plot while hiding from the government agents who want their special ops project shut down.

The set was only open to limited cast and crew members, and they were introduced to the animals and instructed on their proper handling before filming began.

Mooch the fly, Speckles the mole, the snake attacking the glass, the tarantula, the hamster, the worm fed to Speckles, the cockroaches and the guinea pigs were all computer-generated, except for the few guinea pig scenes described below.

In a couple of scenes, real guinea pigs were filmed (such as at the pet store), and used for "establishing" shots before showing the computer-generated versions. Whenever real guinea pigs were filmed, trainers placed them on their marks and either cued the action or allowed them to do whatever came naturally. The actors were extremely well-rehearsed and instructed on the guinea pigs' proper handling. The material seen at the bottom of the cages was their natural bedding. For the scene in which Connor (Tyler Patrick Jones) picks up a guinea pig and holds it upside down, the actor was instructed on how to gently hold the guinea pig for a brief moment. When Connor places the guinea pig into a net and catapults it into the snake and spider cage, trainers instructed the well-rehearsed actor on how to carefully place the guinea pig into the net. There were padded mats below in case the guinea pig fell, which it did not. The rest of the scene, including the pig launching into the air, involved a computer-generated guinea pig, snake and spider.

A chameleon, rats, birds, puppies, dogs, cats and rabbits were placed in their respective cages, perches or aquariums and allowed to do whatever came naturally. They were separated according to species. All temporary housing was inspected, secured and made comfortable before filming began. Several off-camera trainers stood nearby. Snakes, lizards and frogs seen in cages were rubber props.

Several dogs stand in a front yard while a tire rolls down the sidewalk. Trainers placed the dogs in sitting positions and cued them to stay while a tire was rolled into the camera frame. Streets were closed off to traffic. The Dobermans keeping watch outside the wealthy man's home were well-trained dogs accustomed to the action. Off-screen trainers cued walking with guards, barking and digging using verbal commands. For the scene in which a dog sticks its head into a mole hole, trainers had created a small hole in the ground, placed an object in it and cued the dog to "find it." For the scene in which Blaster the guinea pig flies through the air and hits a dog in the head, the dog was cued to react to a bait stick gently tapped on its head. The guinea pig was added in post-production.

A trainer placed a squirrel on its mark on the ground and allowed it to eat a nut during this brief and mild scene. As soon as it walked away, trainers retrieved it. The area was secured so that the squirrel could not get away.

Production provided documentation that the fox pelts and fur coats were props.