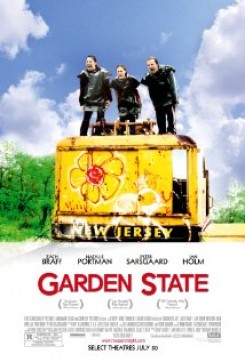 The accidental death of his quadriplegic mother brings Andrew Largeman (Braff) back to his childhood home in New Jersey after a decade-long absence. As he slowly emerges from the fog of psychotropic drugs that has shrouded him since adolescence, "Large" reconnects with old friends and meets Sam (Portman), a spirited young woman who awakens feelings in him that he never thought possible.

In the reception area of a neurologist's office, Large must contend with Arthur, an overly affectionate seeing-eye dog. With the actor seated in a chair, a trainer brought over the German shepherd and verbally cued him to hop up and mount Braff's leg. When the director called "cut," the dog got off the actor on his own. Three trainers worked this scene, and the German Shepherd was extensively prepped beforehand.

During his first visit to Sam's house, Large is greeted by three rambunctious Dobermans. Trainers led the dogs in on leash, and when the actors walked through the door, handlers released the dogs and cued them to jump on Braff. The actor let the Dobermans smell concealed treats in his hands, which enticed them to stay "up." When "cut" was called, Braff distributed the biscuits and trainers returned the dogs to their starting mark. As a safety precaution, the American Humane Animal Safety Representative on-set instructed the actor not to look the Dobermans directly in the eyes to avoid possible issues with aggression.

The scene continues in Sam's living room, where an enormous habitat for hamsters fills one corner of the room. Background props included fish tanks and bird cages in various areas on the set; however, the birds, fish, and hamsters were not handled in the film and production submitted the appropriate documentation for their use. The dead hamster Sam holds throughout the scene was supplied by a New Jersey taxidermist.