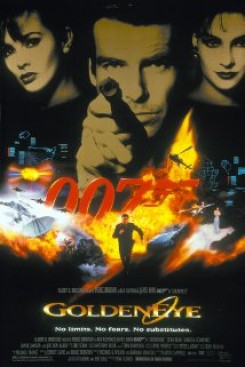 Goldeneye is the latest James Bond episode which opens with Bond and another agent, Alec, on a mission at a chemical warfare plant in the Siberian area of the USSR. Alec is killed, but Bond escapes. Nine years later, Bond starts off racing in a sports car down dangerous curving roads. He is in the car with a young "Miss Moneypenny" sent from his office to evaluate his psychological condition. Another red sports car appears and we see a sultry woman with dark hair driving. She eagerly starts a car chase with Bond. Bond gets the best of the chase, but we know he will meet the sultry lady again and he does at a casino where she is seen smoking a cigar. Yet, Bond is the one who wins at the tables playing Baccarat as our lady loses and storms off with her escort. This Georgian/Russian femme fatale is seen in the next scene having sex with her military escort at the casino. During the act, she kills him with her legs. She steals the lover's military identification and the usual story of intrigue begins. She is on a helicopter going to Siberia to meet co-conspirators in a bunker. We find out at this time that Goldeneye is a satellite weapon powerful enough to destroy whole countries and the plan is to control the economy of the world by this destruction. In another Siberian bunker where the control mechanism for Goldeneye is housed, we are introduced to Natalia, one of the computer technicians in the Russian space facility. She works with a young male Russian, Boris, who is a computer whiz and shows off his cleverness to Natalia. More intrigue ensues when the bunker that Natalia and Boris are working in is blown up, spectacularly, of course, and she is the sole survivor. Before she escapes, however, she sees the two people who were responsible for the bombing, a Russian general and our femme fatale. The CIA then begins working in conjunction with Bond who enlists the help of Natalia. She tries to get information through a computer and discovers that Boris was also able to escape the bombing, but is now working for the evil faction. Together, Bond and Natalia resolve the bombing, have a romantic interlude and save the world economy.

Animal action is extremely mild in this film and consists of several Huskie dogs. In the beginning of the film there is a quick shot of a dog team pulling a sled in Siberia. Later we see the dogs still in their harness, tied to the sled which is parked in the woods outside the bunker site. As Natalia runs for her life after the explosion, she comes upon the dogs in the woods and they bark at her. Goldeneye was a foreign production shot entirely in England and Europe. American Humane was not on set.